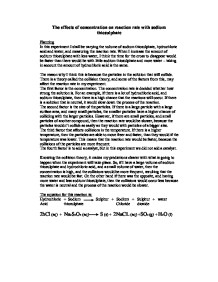 The effects of concentration on reaction rate with sodium thiosulphate

They should be the regular rules that tell you to not run around the lab, and to always wear safety glasses while carrying out an experiment, and to not leave any items on the floor that you might trip up on. Also, do not leave glass objects near the edge of the table because they could easily roll on the floor and smash. Not following these could be quite dangerous, so you must be careful at all times. The experiment Equipment used: * Measuring cylinder * 50ml of sodium thiosulphate * 40ml of water * 30ml of hydrochloric acid * A card with a cross in the centre * A conical flask * A stop clock * Safety glasses Method 1. Measure 50ml of sodium thiosulphate in a flask, and 5ml of hydrochloric acid in a different flask. (Remember that the acid is an irritant, so be careful when measuring it into the measuring cylinder, and always wear safety glasses.) 2. Place a conical flask on a piece of card with a cross on the centre, and when you have finished pouring the liquids into the flask, start the stop clock. ...read more.

That is also another reason why I carried it out three times to give me a better idea. To take the investigation further, I think I would have taken more readings to show exactly the shape of the curve on the graph. Instead of having 60ml, 50ml, 40ml etc, I would have 60ml, 55ml, 50ml, 45ml, 40ml etc. This would then give me 12 readings on a graph for three experiments, and could help me see the exact shape of the curve near a peak or dip. There are a few advantages to doing this. a. There would be more readings which would give better evidence to my prediction. b. It should show a perfect curve in the graph if the experiment was carried out correctly and accurately. There are also a few disadvantages to doing this. And they are: a. On the graph because there are more points it could look a little untidy. b. The experiment would take longer to carry out. Overall, I am quite happy with my results and the experiment that I carried out, because it proves my prediction before the experiment and it shows that knowing the collision theory, you can estimate what will happen in an experiment. ...read more.