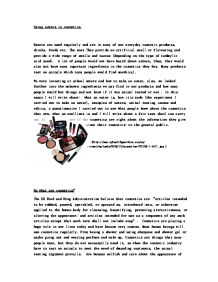 What an ester is, how it is made, examples of esters, animal testing issues and ethics.

Using esters in cosmetics Esters are used regularly and are in many of our everyday cosmetic products, drinks, foods etc. The most They provide an artificial smell or flavouring and provide a wide range of smells and tastes (depending on the type of carboxylic acid used). A lot of people would not have heard about esters, thus, they would also not know many important ingredients in the cosmetics they buy. Many products test on animals which many people would find unethical. We were investing at school esters and how to make an ester, also, we looked further into the unknown ingredients we may find in our products and how many people would but things and not know if it was animal tested or not . In this essay I will write about: what an ester is, how it is made (the experiment I carried out to make an ester), examples of esters, animal testing issues and ethics, a questionnaire I carried out to see what people knew about the cosmetics they own, what an emollient is and I will write about a fair test that I can carry out to see if the cosmetics are right about the information they give about their cosmetics- to the general public. (http://www.myhealthguardian.com/wp-content/uploads/2009/10/cosmetics-070126-1-full.jpg ) So what are cosmetics? The US Food and Drug Administration believe that cosmetics are "articles intended to be rubbed, poured, sprinkled, or sprayed on, introduced into, or otherwise applied to the human body for cleansing, beautifying, promoting attractiveness, or altering the appearance: and articles intended for use as a component of any such articles except that such term shall not include soap". Cosmetics are playing a huge role in our lives today and have become very common. Most human beings will use cosmetics regularly. From having a shower and using shampoos and shower gel or maybe going out and wearing perfume and make up. ...read more.

The gas is hydrogen because when a lighted splint is put onto the test tube a 'pop' is heard. 3. When another tube with 1/3 of dilute ethanoic acid and a spatula of sodium hydrogen carbonate is added the solution bubbles. 4. Test the gas given off and repeat step 3 but with sodium carbonate. Reaction What does this mean? 1.Yellow litmus paper and ethanoic acid turns red The pH of ethanoic acid is 1 (meaning very acidic) 2.Gas made and lighted splint Gas pops This means that hydrogen is made in the reaction 3.Sodium hydrogen carbonate + ethanoic acid Bubbles This means a gas is being produced Evaluation of experiment one: This is experiment could have been more reliable. We could have repeating the experiment at least three times, because we could have produced an anomaly and not known so. Also, having repeated the test 3 times we could average the results and see what results came up the most- therefore being the correct result. For instance, if we repeated the litmus paper experiment, then we could see what the average colour that came up was, the colour 'red' could have been an anomaly. The test was valid because we used different tubes and pipettes so the results wouldn't be affected. In the experiment I undertook we didn't have time to do step 4 (Test the gas given off and repeat step 3 but with sodium carbonate) so to extend my research I could finish the experiment and also try with other acids, and compare the results. Experiment 2: Making an ester For this experiment a kettle is used to heat instead of a Bunsen burner, because ethanol is highly flammable. Also, the ethanoic acid used in this experiment concentrated (making the previous experiment safer as it was dilute) therefore there is a high safety risk because the concentrated acid will burn through skin if come in contact. ...read more.

There are many different types of esters, such as: isoamyl acetate (with a banana odor) ethyl ethanoate (with a nail polish odour) Octyl acetate (orange odor). Esters are an easy way to obtain a lot of distinctive fragrances at one time and can help the cosmetic producer save money and time as they would be mass making esters. I also learnt that an ester can be used in an emollient as a solvent, which means it can dissolve water and oil together. My conclusion for the topic of 'cosmetics and animal testing' is that many people would argue that animal testing for cosmetics is unnecessary, but as I have discovered through my research and my questionnaire, cosmetics are a big part of our everyday life. They keep us hygienic and attractive and therefore increase our self confidence and appearances to other people. Many people are against animal testing, but if it was the only option available for us to have cosmetics, they might think otherwise. There are alternatives to animal testing, such as human testing- but that would also create a big argument. My opinion is that humans are cleverer and therefore know and feel the effect of what is happening to them and it will breach their human rights. So if the option was between animals being tested on and humans being tested on I would choose animals tested on with less doubt. However, many people may be against animals being tested on for a reason that because animals do not have a say in what is going to happen to them, unlike humans. Many humans volunteer for experiments to gain money, but some animals are bred and born into a life of cruelty that they can only know and they do not benefit from these experiments at all. There is also an option of using ingredients that we already know, but when there is a rising demand in new products and competition in the market, new ingredients have to be introduced and tested. Unfortunately, humans always want the best thing, this will benefit them but others may struggle. ...read more.

This report starts off with a fairly basic, but well written, account of esters. It then goes on to discuss in detail the ethical issues surrounding animal testing. Many good point both for and against are mentioned. It finishes off with the analysis of a questionnaire about cosmetic products and good evaluations are drawn from these results.

For a GCSE student, this piece of coursework is well written and detailed. Well structured but could improve with the aid of a contents table. Good explanation of basic background (what esters are) - shows understanding of question. Detailed ...

For a GCSE student, this piece of coursework is well written and detailed. Well structured but could improve with the aid of a contents table. Good explanation of basic background (what esters are) - shows understanding of question. Detailed response to how esters are made and issues surrounding animals are evaluated well (arguments for and against). To improve further explain why each substance is added (eg sulphuric acid to act as a catalyst).

Consistent level of analysis- good use of subheadings to separate information. Excellent use of statistics and questionnaire results to back up points. Very good use of finding ways to improve accuracy of data. To improve be more clear about observations ( bubbles are produced by CO2 being given off or effervescence) and use a subheading for risk assessment instead of basic information.

Spelling and grammar is excellent. Student should proof read just to ensure- pH is spelt wrong and it shows poor understanding of aspects of science. Overall key terms are used accurately to support argument.