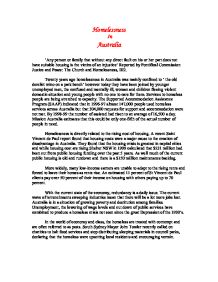 Homelessness In Australia 'Any person or family that without any direct fault on his or her part does not have suitable housing is the victim of an injustice' Reported by Pontifical Commission Justice and Peace: The Church and Homelessness, III2. Twenty years ago homelessness in Australia was mainly confined to ' the old derelict wino on a park bench' however today they have been joined by younger unemployed men, the confused and mentally ill, woman and children fleeing violent domestic situation and young people with no one to care for them. Services to homeless people are being stretched to capacity. The Supported Accommodation Assistance Program (SAAP) indicated that in 1996-97 almost 147,000 people used homeless services across Australia but that 304,000 requests for support and accommodation were not met. By 1998-99 the number of assisted had risen to an average of 16,500 a day. ...read more.

The current wave of retrenchments sweeping industries mean that there will be a lot more jobs lost. Australia is in a situation of growing poverty and destitution among families. Unemployment, the lowering of wage levels and cut down of public services have combined to produce a homeless crisis not seen since the great Depression of the 1930's. In the world of economy and class, the homeless are treated with contempt and are often referred to as pests. South Sydney Mayor John Towler recently called on charities to halt food services and stop distributing sleeping materials in council parks, declaring that the homeless were upsetting local residents and encouraging vermin. Jesus identified himself with the poor. In Mathew 25: 31-46 'I was hungry and you gave me food, I was thirsty and you gave me to drink'. Dedication to the poor and disadvantaged is present in the church's social teaching. ...read more.

The Catholic Archdiocese of Brisbane is responsible for Centercare, which has a family and community service, The Catholic Justice and Peace Community who work to support the powerless and oppressed members of society and is chaired by Bishop John Gerry as well as the Society of St Vincent de Paul. The society provide budget counselling emergency accommodation, family care and support, food banks, hostels for homeless men, and night patrols to visit homeless people delivering sandwiches, tea coffee and to try and alleviate immediate the needs of the homeless. Brisbane City Council reports that between 300 and 500 people are homeless in inner city Brisbane on any given night. Statistics indicate that obviously not enough is being done by governments. Non profit organizations that rely on volunteer and donations. Report that assistance from all sections of the community is down. Without these donations the problem of homelessness is set to increase .The problem of Homelessness remains an important issue for the Catholic as it strikes to follow the teaching of Christ. ...read more.