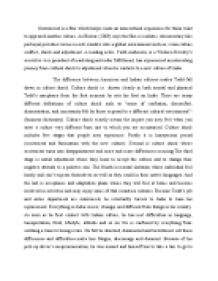 How the film &quot;Outsourced&quot; shows the effects of culture shock on an American in India.

﻿Outsourced is a film which helps create an intercultural experience for those want to approach another culture. As Bisoux (2009) says the film is realistic, documentary like portrayal provides viewers a rich window into a global environment such as: cross-culture conflict, shock and adjustment. A leading actor- Todd Anderson, is a Western Novelty?s executive vice president of marketing and order fulfillment, has experienced an interesting journey from cultural shock to adjustment when he contacts to a new culture of India. The difference between American and Indian cultures makes Todd fall down in culture shock. Culture shock is shown clearly in both mental and physical Todd?s symptoms from the first moment he sets his foot on India. There are many different definitions of culture shock such as ?sense of confusion, discomfort, disorientation, and uncertainty felt by those exposed to a different cultural environment?-(business dictionary). Culture shock exactly means the impact you may feel when you enter a culture very different from one to which you are accustomed. Culture shock includes five stages that people may experience. Firstly it is honeymoon period (excitement and fascination with the new culture). ...read more.

In one scene, he chastises his Indian employees, admonishing: ? Basically, you people need to learn about America?, ignoring the fact that the workers are native English speakers, albeit with a different accent. Another reason that leads Todd to serious manner is his personality. He seemingly thinks that Indian employees are crazy, they don?t know how to work. Therefore, he feels very angry and disappointed, worries that the rest of his life will be in India. If Todd had had time to prepare or take a culture training course, he would have accepted the new culture of India easier and got down the MPI faster. The final reason I think about is Todd?s his ?surrounding society?. To clarify ?surrounding society?, it is when falling down the deadlock, pessimism, and weary, Todd feels homesick and so he calls for his girlfriend. However, she falls in love with another man. Culture shock occurs in this period, and Todd falls down the case of ?a fish out of water? These show out how importance of learning to accept and adapt to the differences in different cultures. Being pushed in up and down, Todd himself begins making some initial transformation in term of adjustment to Indian culture. ...read more.

He is no longer very reluctant to going and accept Indian culture. Now, Todd?s characteristic and attitude are influenced by Indian culture. When he comes back America Todd called to his parents immediately. Todd has evaluated the family value as the most important thing to him. Also, he comes back with habits of drinking coffee with lots of sugar, with the cell phone?s tone that Ash sets for him. In conclusion, from Todd?s culture shock and adjustment, I can draw out the lesson for myself. When moving to another country, it?s important to accept the new culture and adjust to adapt with new culture, customs and habits. Besides, we should prepare and learn about new culture before enter that country. Furthermore, if we keep patience, make friend with the people around, it?s so useful for us to get knowledge from them. As said, when we are shocked, we should take a break and relax as ? draw-back-to-leap?, it helps us to adjust faster. Ethnocentrism is important for each person to praise their homeland?s pride, but we should keep it in an approciate level to get well in new culture. In short, we can learn a lot from people of other cultures as long as they are willing to open and adjust. . ...read more.