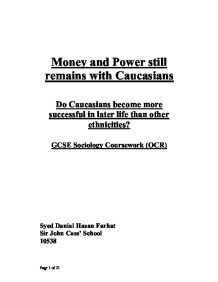 Quantitative data is in numerical form and is used to collect statistics and rates, this is usually gained using large scale methods. Qualitative data is presented as words and is used to get opinions; this is gained using less standard methods. The main ways of gaining primary source of data includes questionnaires, interviews, and observations. Each has a different process and a different use, which I will go through. (I) Questionnaire A questionnaire is usually used to survey a huge number of people, as there is no reason to hire an interviewer. Also the same questions can be printed off in it's thousands this will mean you can reach a huge audience. Plus the payers are portable and can be sent off to anywhere in the world giving a range of repliers. This is fantastic in getting quantitative data to make statistics as so many people can do them. The problem with these questionnaires is that people may not reply or give false information to sensitive issues that they may tell confidentially to an interviewer. Also a person may not understand what a question is asking them to do and there will be no one to clarify it to them. (II) Interviews There are to types of interviews, structured and unstructured. Structured interviews are conducted with a set of questions and unstructured interviews are not but the interviewer guides the interviewee towards what they are trying to find out. In both the interviewer can clarify a question and reassure the confidentiality of the interview so the participant may answer certain personal questions. Unstructured interviews are very good at getting qualitative data but they have big problems such as the data can be lost because the interview is not recorded. This is because this type of interview is used to gain trust from the interviewee and this trust will be lost if they see the interview is being recorded. ...read more.

My interviews were conducted on people I already knew well but were a representative sample. This means that the people will tell me certain information that they may not give to strangers and they will give opinions of a variety of ethnicities. My sample also was representative of gender and of class. My method was a hundred percent successful as I gave out eighteen questionnaires and get all eighteen back. The interviews I conducted gave me a real insight to people's opinions on a strong issue. But these were difficult to record, as I had to conduct the interview and write exactly what the participant was saying at the same time. There were some problems with my sample as one more person of another race participated in the survey than a Caucasian person. I overcame this by converting everything to percentages to make the results more presentational. Also there was a problem of placing people of mixed race or nationality into a group. The simple ones were of people from the same race such as a half Irish half English person they would go in Caucasian. But I chose to put people from mixed races to the other ethnicity group, as my study was whether Caucasians do better in later life than other ethnicities. My own performance I think was very good and the participants of my study have said I was very professional. I had one major problem of stopping myself from putting words in the mouth of a participant when they took time over answering a question but I managed it. I found it rather easy to put my results into graphs. Also I believe I have met all my aims. The only change I would like to make to my study is to make it bigger and maybe go and study people from other parts of the country and maybe get their opinions and information. Overall I think that my study was a success. ...read more.