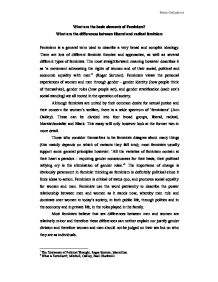 What are the basic elements of Feminism? What are the differences between liberal and radical feminism

What are the basic elements of Feminism? What are the differences between liberal and radical feminism Feminism is a general term used to describe a very broad and complex ideology. There are lots of different feminist theories and approaches, as well as several different types of feminists. The most straightforward meaning however describes it as 'a movement advocating the rights of women and of their social, political and economic equality with men'1 (Roger Scruton). Feminism views the personal experiences of women and men through gender - gender identity (how people think of themselves), gender roles (how people act), and gender stratification (each sex's social standing) are all rooted in the operation of society. Although feminists are united by their common desire for sexual justice and their concern for women's welfare, there is a wide spectrum of 'feminisms' (Ann Oakley). These can be divided into four broad groups, liberal, radical, Marxist/socialist and Black. This essay will only however look at the former two in more detail. Those who consider themselves to be feminists disagree about many things (this mainly depends on which of variants they fall into); most feminists usually support some general principles however: 'All the varieties of feminism contain at their heart a paradox - requiring gender consciousness for their basis, their political rallying cry is the elimination of gender roles.'2 The importance of change is obviously paramount in feminist thinking as feminism is definitely political since it links ideas to action. ...read more.

The first major feminist political statement was Mary Wollstonecraft's Vindication of the Rights of women in 1792. She argued that women should be entitled to the same rights and privileges as men on the grounds that they too were 'human beings'.5 She believed the key to liberating women lay in education. Education has always been advocated my liberals as a way of replacing ignorance and prejudice and liberal feminists have looked to education to widen the 'narrow mental horizons imposed on women by domesticity.'6 But later feminists saw this as only the beginning, they argued that freedom and equality for women could only really come about through legal reform, for example the right to influence political decisions through the vote. John Stuart Mill and Harriet Taylor developed this idea, saying that equal rights for women were necessary not only to correct the injustices they faced but also to promote the moral and intellectual progress of humanity. 7 Liberal feminists accept the basic organisation of society and politics but seek to expand the rights and opportunities of women. Liberal feminists support equal rights and oppose prejudice and discrimination that get in the way of the ambitions of women. So liberal feminists campaign for the removal of the social, economic, political and legal obstacles that deny women the same freedom as men. ...read more.

However, other feminists see the new reproductive technologies as based on patriarchy and male science - a way of robbing women's rights over their own wombs. Furthermore, they celebrate women's key role as mothers. Differences such as these in opinion within radical feminism are somewhat confusing. Feminist theory is still a well - known and widely supported ideology, however, its high point was during the 1960's and 1970's in which many of the goals that were sought, particularly by the liberal feminists, for instance the vote, equal opportunities at work and so forth have been more or less achieved. Some radical feminist ideas too, such as the legalisation of abortion etc have also now been accomplished, although the other recommendations, concerning reproduction outside the female body have more or less been dismissed as too radical. The basic goal however for feminists from the beginning of the movement had been to emancipate women from society's patriarchal order and this on the surface seems to have been achieved. More and more women are being employed in influential posts at work, men are seen to do more domestic and child associated activities and women of course now have the same access to education as men. However, it can also be seen that the majority of women in today's society are still playing the stereotypical female role in society. ...read more.