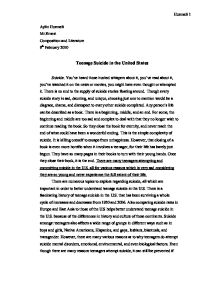 Teenage Suicide in the United States

Aylin Huzmeli Mr.Ernest Composition and Literature 8th February 2010 Teenage Suicide in the United States Suicide. You've heard those hushed whispers about it, you've read about it, you've watched it on the news or movies, you might have even thought or attempted it. There is no end to the supply of suicide stories floating around. Though every suicide story is sad, daunting, and unique, choosing just one to mention would be a disgrace, shame, and disrespect to every other suicide completed. Any person's life can be described as a book. There is a beginning, middle, and an end. For some, the beginning and middle are too sad and complex to deal with that they no longer wish to continue reading the book. So they close the book for eternity, and never reach the end of what could have been a wonderful ending. This is the simple complexity of suicide. It is killing oneself to escape from unhappiness. However, that closing of a book is even more horrific when it involves a teenager, for their life has barely just begun. They have so many pages in their books to turn with their young hands. Once they close their book, it is the end. There are many teenagers attempting and committing suicide in the U.S. all for various reasons which is very sad considering they are so young and never experience the full extent of their life. There are numerous topics to explore regarding suicide, all which are important in order to better understand teenage suicide in the U.S. There is a fascinating history of teenage suicide in the U.S. that has been surviving a whole cycle of increases and decreases from 1950 and 2006. Also comparing suicide rates in Europe and East Asia to those of the U.S helps better understand teenage suicide in the U.S. because of the differences in history and culture of these continents. ...read more.

Though, each group is affected by suicide differently since they experience different events and respond to them differently. Still, it makes no difference of the severe magnitude of this daunting issue that affects teenagers. There are many variations between male and female teenagers regarding the attempt and completion of suicide. Over history there have usually been higher rate of boys who actually commit suicide than girls (Pyle et al.). Also, for every sole female suicide, there are 4 other males' suicides. Furthermore, according to the American Psychiatric Association, 4 times as many teen boys succeed at suicide than teen girls. However, 3 times as many females actually attempt suicide (Sobhe). In addition, males use firearms or hang themselves more often than women. Those common deadly and lethal methods succeed in killing more often than overdoses of drugs or cutting oneself, which are the most common methods of females (Sobhe). A large group affected by suicide is Native Americans. Black youths have a lower suicide rate than their white counterparts, but the suicide among Native Americans increased dramatically during the past decades ("Black Teens"). For instance, in 1980 the suicide rate for white teenagers was 157% higher than blacks, although, in 1995 there was only a difference of 42% (Carter). The rate of black teenagers between the ages of 15 to 19, had actually more than doubled from 3.6 per 100,000 to 8.1 per 100,000 from 1980-1995("Statistics"). Also more black girls are at a higher risk for suicide than boys. A survey by the NSAL of randomly picked 810 African Americans and 369 Caribbean black teens aged 13-17 showed that in a year, African American teen girls are most likely to attempt suicide, followed by Caribbean teen girls, African American teen boys, and Caribbean teen boys ("Black Teens"). Though based on the statistics in 2003, Native American females had a rate of 9.0 per 100,000 while males had a much higher rate of 25.7 per 100,000 (CTD). ...read more.

Conclusion Our lives are very much like a book. It all depends on us to turn the next page or to abruptly close it in the middle to never glance at it again. It is our choice to walk upon the next pages onto another chapter, or to give up reading and die. Every individual's story is unique and special, however some come to an end, far too early. There are teenagers all over the United States are shutting their books by committing suicide for different reasons which is tragic since they are still so young. Suicide is such an interesting topic though, and people should be much more aware of this huge issue. Suicide really is a fascinating subject since it deals with so many other issues that teenagers face. It's so elevating to learn about the differences that occur in teenagers. How some can cope with events and emotions, while other just need a way out and believe that killing themselves allows that. Even factors that cause suicide ideation are mindboggling. It's amazing to learn that so many teenagers are affected by mental disorders, emotions, events, environmental and social issues. It makes me feel luckier that I do not suffer from some of the issues that others do, and that I have a tight bond with my family. Though researching about suicide is upsetting, because one learns how so many young lives are lost that could have been prevented. I honestly hope that one day I can help people who are going through tough times, because there is an answer to every problem. Since, suicide is not an answer to anything. I want to be able to read the story of a person life from when they are a baby to when they are grandparents. No one should have to read a story of a young teenager killing themselves. It is one of the greatest losses to the world, and I hope that it changes in due time. ?? ?? ?? ?? Huzmeli 1 ...read more.