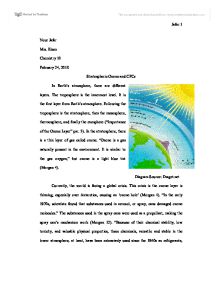 Nour Jafar Mrs. Elsen Chemistry 10 February 24, 2010 Stratospheric Ozone and CFCs In Earth's atmosphere, there are different layers. The troposphere is the innermost level. It is the first layer from Earth's atmosphere. Following the troposphere is the stratosphere, then the mesosphere, thermosphere, and finally the exosphere ("Importance of the Ozone Layer" par. 3). In the stratosphere, there is a thin layer of gas called ozone. "Ozone is a gas naturally present in the environment. It is similar to the gas oxygen," but ozone is a light blue tint (Morgan 4). Diagram Source: Draget.net Currently, the world is facing a global crisis. This crisis is the ozone layer is thinning, especially over Antarctica, causing an 'ozone hole' (Morgan 4). "In the early 1970s, scientists found that substances used in aerosol, or spray, cans damaged ozone molecules." The substances used in the spray cans were used as a propellant, making the spray can's mechanism work (Morgan 12). "Because of their chemical stability, low toxicity, and valuable physical properties, these chemicals, versatile and stable in the lower atmosphere, at least, have been extensively used since the 1960s as refrigerants, industrial cleaning solvents, propellants in aerosol spray cans, and to make Styrofoam." ...read more.

3). Science and mankind have been working together hand in hand to try and eliminate CFCs from rising into the atmosphere and destroying the ozone. "The only way to stop the damage that is being done to the ozone layer by the CFCs is to stop using them. That means we must find safe ways of doing the jobs CFCs used to do," (Morgan 26). One of the first steps on eliminating CFCs from the environment was the Montreal Protocol. "In 1987, 31 nations signed the Montreal Protocol." (Morgan 26). The agreement made by the 31 nations was successful from the start. This success led to large cuts in the use of CFCs. The Montreal Protocol also mentioned that methyl bromide use should be cut down in order to restore the ozone level. Industries that produce foam fillings, air conditioning units, polystyrene or refrigerators are now using alternatives to CFCs. They are now using different artificially made chemicals as replacements to CFCs. These chemicals still damage the ozone, but not to the extent as CFCs. There is a CFC replacement that does not damage the ozone at all, and it is natural. ...read more.

the Ozone Hole" par. 26). Scoffers mentioned that if every American was to buy two bottles of sunscreen, sunglasses and a sunhat, the bill would reach around 8 billion USD per year. That does not seem to be a cheaper way of handling things. Dealing with the problem will be expensive to start with, but in the long run, it is cheaper than living with the problem. This issue has a large impact on the environmental aspect of society. Society is taking charge of how to minimise this issue. Many industries and farms are now reducing their CFC intake, or eliminating it totally, to try and repair the ozone hole. The head of the United Nations Environment Programme has mentioned that "the efforts to repair the ozone layer has been one of the greatest environmental success stories," (Morgan 28). Industries that supply or create foam packages are needed to limit using ozone-damaging chemicals (Morgan 28). One action plan that is taking place today to minimize the CFC emissions from refrigerators. Since old second hand refrigerators are being imported to Ghana from Europe still contain CFCs, refrigerator manufacturers are training locals on how to convert refrigerators running on CFCs to run on propane gas, to make them more environmentally friendly (Morgan 29). ...read more.