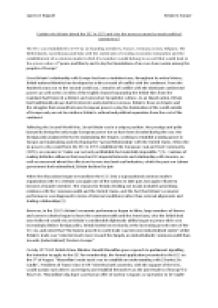 Explain why Britain joined the EEC in 1973 and why the process caused so much political controversy?

﻿Laurence Brignull Britain In Europe Explain why Britain joined the EEC in 1973 and why the process caused so much political controversy? The EEC was established in 1957 by six founding members, France, Germany (west), Belgium, The Netherlands, Luxembourg and Italy with the stated aim of creating economic integration and the establishment of a common market which it?s members would belong to as well that would lead to the preservation of ?peace and liberty and to lay the foundations of an ever closer union among the peoples of Europe" Great Britain?s relationship with Europe has been a turbulent one, throughout its entire history; British national identity has developed as a direct result of conflict with the continent. From the Hundred years war to the second world war, Centuries of conflict with the dominant continental powers as well as the 21 miles of the English Channel separating the British Isles from the mainland had fostered a distinct and somewhat Europhobic culture. As an Island nation, Britain had traditionally always had its interests and priorities overseas. Britain?s focus on Empire and the struggles that ensued between European powers vying for domination of the world outside of Europe only served to reinforce Britain?s cultural and political separation from the rest of the continent. Following the Second World War, Great Britain was in a unique position. Her prestige and pride buoyed by being the only major European power not to have been invaded during the war. ...read more.

2. A) why was the Lisbon treaty introduced b) how has the Lisbon changed structure and powers of the EU institutions? The Lisbon treaty came into force on the 1st of December 2009, following the signing of the document by EU member in December 2007. Following the failure of the proposed European Constitution to be ratified in 2005 a ?Period of reflection? Was proposed in order to decide what direction the European Union should take in the future. In 2007 the rotating presidency of the European Union passed to Germany, who were determined to push forward with another treaty to further centralise the EU. In March 2007 the EU member states agreed the ?Berlin Declaration? outlining the intention to have a new treaty ratified by mid 2009. The new treaty was intended to streamline the EU by giving greater power to the European Parliament giving greater control over legislation, budgetary matters and removing a number of veto powers from member states. The treaty was designed to increase the legislative efficiency of the European Union, making it easier for laws to be passed. The Complicated voting system of the treaty of Nice, where three different conditions had to be met for a vote to be considered a Majority are to be reduced under the treaty to a simpler requirement that 55 per cent of the member states representing 65 per cent of the Union?s population agree. In a move to further centralise to smooth the wheels of European politics, the office of president was created by the Lisbon treaty. ...read more.

It is also dependent on The European parliament to pass the legislation which it proposes. The European Parliament, in contrast to the Commission is directly elected and is the legislative branch of the European Union. Whilst it cannot propose legislation itself it has the final say on what legislation passes and also exercises an amount of power over the budget of the EU. The European commission is accountable to the parliament and the leader of the commission is elected by members of the European parliament. Whilst the Parliament cannot veto new treaties it wields considerable influence, and has previously persuaded national parliaments to veto proposals, such as the Treaty of Nice The European Court of Justice?s main remit is to interpret the laws passed by the parliament. It is the Highest Court of the EU in matters of Union law, however it is not possible to appeal cases made by national courts to the ECJ. However, whilst one of its main roles is to answer questions posed by national courts regarding EU law it is ultimately up to national courts to apply the resulting interpretation to the facts of the case. One of the main responsibilities of the ECJ is to ensure that the advice given regarding EU law is consistent across the union. 1(Robert Schuman; 9 may 1950; The Schuman Declaration) 2 (http://80.251.40.59/politics.ankara.edu.tr/hdogan/essays/essay1.html) 3 (Sutcliffe, op.cit., p. 232. http://80.251.40.59/politics.ankara.edu.tr/hdogan/essays/essay1.html) 4(George, op.cit., p. 35 http://80.251.40.59/politics.ankara.edu.tr/hdogan/essays/essay1.html ) 5(Charles De Gaul; 14th Jan 1963; Speech at Elysee Palace) 6(Johnson et al, op. cit., p. 17 http://80.251.40.59/politics.ankara.edu.tr/hdogan/essays/essay1.html 7(http://en.wikipedia.org/wiki/President_of_the_European_Council#Duties_and_powers) 8 (http://www.independent.ie/national-news/lisbon-treaty/the-lisbon-treaty-for-dummies-1376340.html) 9 (http://europa.eu/about-eu/institutions-bodies/index_en.htm) ...read more.