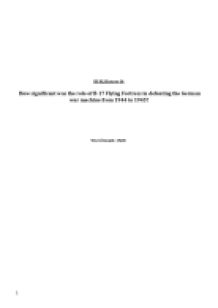 How significant was the role of B-17 Flying Fortress in defeating the German war machine from 1944 to 1945?

﻿IB HL History IA How significant was the role of B-17 Flying Fortress in defeating the German war machine from 1944 to 1945? Word Count: 1568 Table of Contents page Section A: PLAN OF INVESTIGATION 3 Section B: SUMMARY OF EVIDENCE 3 to 5 Section C: EVALUATION OF SOURCES 5 Section D: ANALYSIS 5 to 6 Section E: CONCLUSION 6 Section F: SOURCES 7 A: Plan of the Investigation: The investigation will evaluate the significance of the B-17 Flying Fortress in defeating the German war machine from 1944 to 1945. The investigation will assess the European Air War along with it?s role in suppressing Germany?s power and new weapons of mass destruction, analyzed in the sources, ?History of World War II: Victory and Aftermath? by Marshall Cavendish and ?History Learning Site ? B-17 Flying Fortress? by Chris Trueman. Strategy and tactics will be briefly mentioned of the bombing assessment, and only the American Air Forces will be discussed, ignoring the British influences upon destroying German War Machines in the European Air War. Furthermore, the relationship between the B-17 Flying Fortress and the failure of German industrial production will also be taken into consideration as another factor of defeating the German war machines. ...read more.

With the B17 annihilating and wiping every living or standing thing on the German soil, the German forces did not have fertile soil to produce crops to support food needs. Starvation will lead to violence, ultimately to death, overall destroying the German army. E: Conclusion The B-17 Flying Fortress played a significant role in defeating the German war machines in 1944-1945. The American Air Force have crippled the German war machines through various ways. Destroying most of Germany?s fuel producing industry has basically halt the German birds flying in the skies, and tanks from crushing through the Allied power. Also, destroying the many Luftwaffe products has obviously helped reducing the number of war machines held by the German army. Overall, it is clear to say that the B-17 Flying Fortress played a significant role in reducing the amount and effectiveness of the war machines between 1944 an 1945. F: Sources Cavendish, Marshall. History of World War II: Victory and Aftermath. New York: Marshall Cavendish, 2004. Print. Trueman, Chris BA. "B17 Flying Fortress." N.p., n.d. Web. <http://www.historylearningsite.co.uk/b17_flying_fortress.html>. Speer, Albert. Inside the Third Reich: Memoirs by Albert Speer. New York [N.Y.: Bonanza, 1982. Print. Dear, Ian, and M. R. D. Foot. The Oxford Companion to World War II. Oxford: Oxford UP, 1995. Print. Sherman, Steven. "Boeing B-17 Flying Fortress." B-17 Flying Fortress. N.p., n.d. Web. <http://acepilots.com/planes/b17.html>. ...read more.