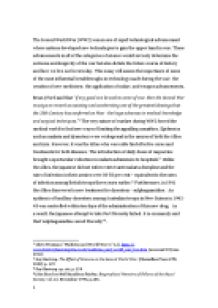 Technological Developments Made During WW2

﻿The Second World War (WW2) was an era of rapid technological advancement where nations developed new technologies to gain the upper hand in war. These advancements in all of the categories of science would not only determine the outcome and longevity of the war but also dictate the future course of history and how we live our lives today. This essay will assess the importance of some of the most influential breakthroughs in technology made during the war: the creation of new medicines; the application of radar; and weapon advancements. Brian J Ford said that ?if any good can be said to come of war, then the Second War must go on record as assisting and accelerating one of the greatest blessings that the 20th Century has conferred on Man - the huge advances in medical knowledge and surgical techniques.?[1] The very nature of warfare during WW2 forced the medical world to find new ways of limiting the appalling casualties. Epidemics such as malaria and dysentery were widespread in the armies of both the Allies and Axis. However, it was the Allies who were able find effective cures and treatments for both diseases. The introduction of daily doses of mepacrine brought a spectacular reduction in malaria admissions to hospitals.[2] Unlike the Allies, the Japanese did not ...read more.

Many revolutionary weapon advancements were made during WW2. While some of those advancements would have little or no effect on the outcome of the war, they had a huge influence on the subsequent course of history. One of these weapons is the German Vergeltungswaffe 1 (V1). The V1 was one of two ?vengeance weapons? created by Germany towards the end of the war. It was a pilotless aircraft that could bomb the enemy from very long distance. The V1 was first launched against Britain in June 1944, just one week after D-Day. [12] While it would have little overall impact on the war, it was the world?s first cruise missile and would pioneer future drone and cruise missile technology. Theoretically the cruise missile could bomb another nation into submission without sending any troops or pilots into combat, thus revolutionizing future warfare. The Aggregat-4 (A4), more commonly known as the V2, was the second ?vengeance weapon? created by the Nazis. It was the world?s first ballistic missile and first known human artifact to enter outer space. [13] Unlike the V1, the V2 fell at four times the speed of sound, making it impossible for fighters or anti-aircraft guns to shoot it down. ...read more.