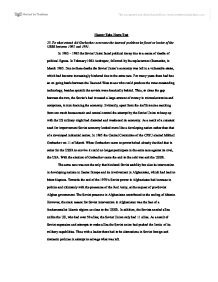 Total War: To what extend did Gorbachev overcome the internal problems he faced as leader of the USSR between 1985 and 1991.

History Take Home Test 23. To what extend did Gorbachev overcome the internal problems he faced as leader of the USSR between 1985 and 1991. In 1982 - 1985 the Soviet Union faced political decay due to a series of deaths of political figures. In February 1982 Andropov, followed by his replacement Chernenko, in March 1985. Due to these deaths the Soviet Union's economy was left in a vulnerable states, which had become increasingly hindered due to the arms race. For many years there had bee an on going battle between the East and West to see who could produce the most outstanding technology, besides sputnik the soviets were drastically behind. Thus, to close the gap between the two, the Soviet's had invested a large amount of money in microelectronics and computers, in turn draining the economy. Evidently, apart from the inefficiencies resulting from too much bureaucratic and central control the attempt by the Soviet Union to keep up with the US military might had distorted and weakened its economy. As a result of a constant need for improvement Soviet economy looked more like a developing nation rather than that of a developed industrial nation. In 1985 the Central Committee of the CPSU elected Mikhail Gorbachev on 11 of March. When Gorbachev came to power he had already decided that in order for the USSR to survive it could no longer participate in the arms race against its rival, the USA. ...read more.

For instance he dropped the dual-track policy of peaceful coexistence to ensure Soviet security combined with the desire for the peaceful long-term victory of socialism across the world. However, there was one major difference between the old and new policy, previously there had been the idea of peaceful but competitive coexistence, this was not Gorbachev's aim. Thus, Gorbachev opened up talks with the USA to discuss arms controls and spoke of the need to withdraw Soviet troops from Afghanistan. Furthermore, he emphasized the need for the arms race to come to an end, as all that was needed for Russia's security was the military capacity to threaten an effective counter-attack. Despite Gorbachev's made him extremely popular abroad, at home they were widely criticized from more conservative quarters. As main Soviets believed that they only way to insure a monopoly of power was to decrease democracy, many wishing to continue with the Stalinist system. Over the need three years a series of summits would be held between the USA and the Soviet union in order to come to an agreement about the arms control, however, many were ineffective and produced very little results with Gorbachev caving in a the last minute. As a result of the four summits the cold war came to an end as did a reduction in arms. ...read more.

In order to receive US assistance Gorbachev had to compel with Bush's demands, accepting the reunification of Germany. Further glitches became evident when the Baltic republics began to press for independence, however, the US was not in favor of this. As tensions increased within the USSR, the US need Soviet support in the Iraq war. However, by 1991 Gorbachev was beginning to think that US economic aid promised to him would not be given at all. Although some aid was given the US were not willing to assist the USSR unless it conformed to a capitalist economy. Matters were made worse when the KGB claimed to have evidence that the USA was attempting to bring about the disintegration of the USSR. In July of 1991 the Warsaw Pact was dissolved, leaving NATO still in existence and unchallenged, however, this promoted a group of political and military leaders decided to overthrow Gorbachev. The Soviet Union was in ruins. Economically it was in taters and his political party saw his policies as undermining the Communist party. In December 1991, Russia declared the formation of the Commonwealth of Independent States. The on the 25 of December, Gorbchev announced his resignation as president of the Soviet Union. Gorbachev had tried to reframe a broken down economy and country, yet he failed. His policies of perestroika, glasnost and demokratizatsiya and novoe myshlenie, new thinking, were unsuccessful and ultimately brought the collapse of the USSR. ...read more.