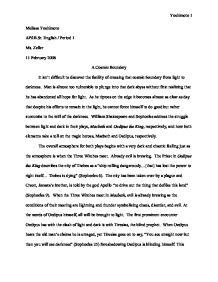 Melissa Yoshimoto AP/IB Sr. English / Period 1 Ms. Zeller 11 February 2008 A Cosmic Boundary It isn't difficult to discover the facility of crossing that cosmic boundary from light to darkness. Man is almost too vulnerable to plunge into that dark abyss without first realizing that he has abandoned all hope for light. As he tiptoes on the edge it becomes almost as clear as day that despite his efforts to remain in the light, he cannot force himself to do good but rather succumbs to the will of the darkness. William Shakespeare and Sophocles address the struggle between light and dark in their plays, Macbeth and Oedipus the King, respectively, and how both elements take a toll on the tragic heroes, Macbeth and Oedipus, respectively. The overall atmosphere for both plays begins with a very dark and chaotic feeling just as the atmosphere is when the Three Witches meet. ...read more.

This revelation finally enables Oedipus to see the horror behind his fate. He was once seen as the "morning of light" when he was ignorant of his sins, but that they are revealed he has become the "night of endless darkness." In discovering the truth, Oedipus darkens his eyes to take it away, just as Macbeth chooses to ignore his hand and its actions. Both characters constantly attempt to push away the ever-submerging guilt of their sins but to no avail. The main "light" in Oedipus the King is a false one, for the people of Thebes, and Oedipus as well, are fooled into believing that their new king is a shining beacon of hope. This beacon fades all too quickly as Oedipus is forced to come to terms with his tragic fate with the "unspeakable darkness enclosing him" (Sophocles 74). In Macbeth, the darkness overwhelms the kingdom of Scotland quickly as Macbeth encourages his deepest desires: "Stars, hide your fires;/ Let not light see my black and deep ...read more.

iv. 7-8) implying, that the night has overpowered the day. We see this flickering candle theme once again with Lady Macbeth. By Act V, she has driven herself into a suicidal state full of guilt. She no longer embraces the power of the darkness as she once did but rather cannot bear to be without a light. This goes for Oedipus as well where it becomes almost too late for him to confess his sins. At this point, there is no turning back, for the candle has already blown out. Both Macbeth and Oedipus struggle with themselves to keep a clear conscience despite their sins, but neither Macbeth nor Oedipus remain on the lighted path. Instead, they both deviate and even ask the gods to overlook their evil deeds. Although Oedipus the King portrays darkness in the lack of sight and Macbeth portrayed darkness as man's deepest desires, both displayed the darkness as a veil to mask over their black souls. Little do they know that the fa�ade only reaffirms their vulnerability to fall over that cosmic boundary and into the dark. Yoshimoto 1 ...read more.