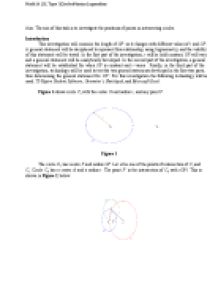 Math IA Type 1 Circles. The aim of this task is to investigate the positions of points in intersecting circles.

Aim: The aim of this task is to investigate the positions of points in intersecting circles. 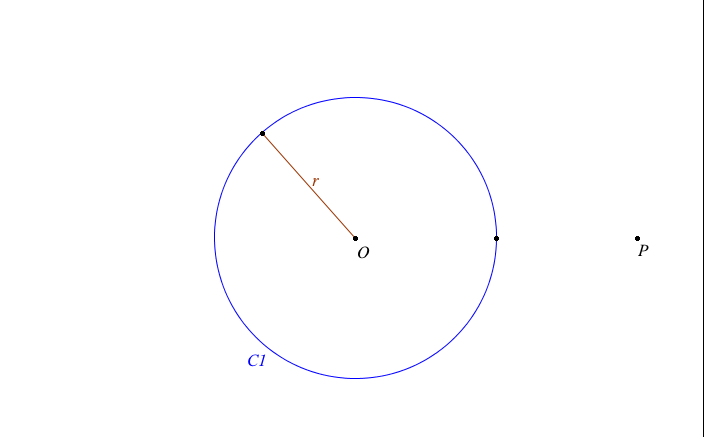 The circle C2 has center P and radius OP. Let A be one of the points of intersection of C1 and C2. Circle C3has a center A and a radius r. The point P’ is the intersection of C3 with (OP). This is shown in Figure 2, below. 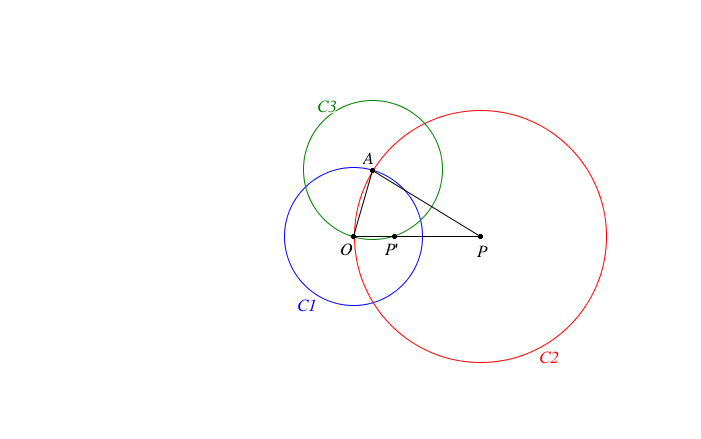 Using TI-Npsire Student Software, the following diagram for when OP=2 and r=2 can be created. 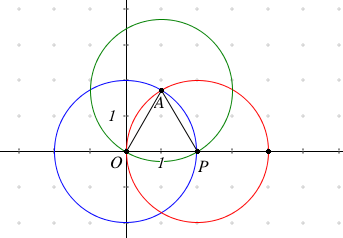 In Figure 5, it is observed that an equilateral triangle has formed, OP= 2 and both OA and AP are also equal to two, since they are both equivalent to r. It can also be observed that point P’ is in the same location as point P, therefore OP = OP’. Thus, OP’ = 2.

Now ∠OAP in ∆AOP is known, and so Φ in ∆AOP’ can be found; since

Since the sum of all angles in a triangle is equal to 180o and ∆AOP’ has two congruent angles, the following can be done:

Now, we are able to use the Sine Law to find the length of OP’.

Upon completing all of the calculations, it is established that when

will not exist. OP cannot equal zero (OP≠0) for another reason; looking at the general statement (OP’=

), OP is the denominator and the denominator can never equal zero because you cannot divide by zero. This has been satisfied by the previous limitation.  As we saw in Part Four, OP must be greater or equal to half the radius {OP

}, because otherwise circles C1and C2 will not intersect.

The purpose of this investigation was to examine the length of OP’ as it changes with different values of r and OP. Through calculations completed in Part I and Part II, two general statements were formulated. From Part I, where r =1 and OP varied, the statement OP’=

was derived. From Part II, where OP=2 and r varied, the statement OP’ =

was analytically determined. From using technology and observing trends in Part III these two general statements were combined into one: OP’=

. The use of programs such as TI-Nspire Student Software, Excel, and Geometer’s Sketchpad allowed for the efficient collection of great amounts of data. TI-Nspire Student Software and Geometer’s Sketchpad, were also used to create visual representation of the different situations that were presented.The use of these two programs was especially important when checking the validity of the general statement. Upon examining limitations of the general statement it has been concluded that OP’=

is limited to {OP