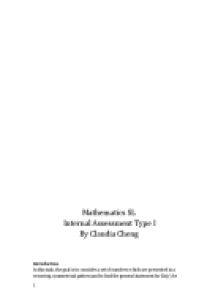 In this task, the goal is to consider a set of numbers which are presented in a recurring, symmetrical pattern and to find the general statement for En(r) be that the (r+1) th element is in the nth row and starting with r=0. 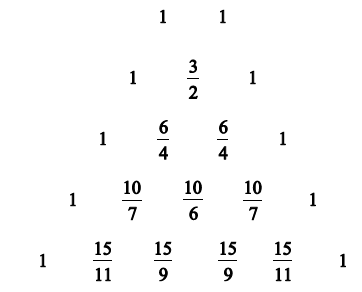 At first glance, I quickly noticed that the word “Lacsap” is “Pascal” spelt backwards. Therefore, the numbers presented in Figure 1 has a strong resemblance to Pascal’s Triangle. 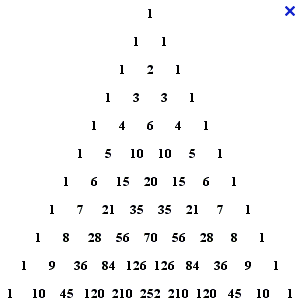 Finding the general statement for numerators

Upon observing Pascal’s Triangle, I noticed that the numbers on the third diagonal row, as highlighted with a blue box, in Figure 2 are the same as the numerators in Lacsap’s fractions in Figure 1. For example, the first number is 1, the second is 3, the third is 6, the fourth is 10 and the fifth is 15. These set of numbers are known as triangle numbers. Triangle numbers enumerate the items that can be arranged in a triangle. Thus, this is useful in founding the patterns in Lacsap’s Fractions. Looking at Pascal’s Triangle, we can then assume the numerator for the sixth row to be 21.

Looking at the three equations derived above, there is an emergence of a pattern. The numbers in each equation match up to their element number hence they are substitutable. Using the format of the first equation deduced from element 1, the element number (r) could be substituted for 1. This results a general statement for the nth term of the denominator where D is the denominator and N is the numerator:

The general statement for En(r)

We have now obtained the general formula for both the numerator and denominator values. Both these formulas can be combined to form a general statement.

Table 6: Calculating the values on the sixth row

As mentioned before, the “1’s” were discarded whilst doing the investigation, but now it must be added back into the beginning and end of the row.

Figure 4 is a newly devised figure of Lacsap’s fractions that has all the values up to the 9th row Through Pascal’s triangle numbers, the use of graphing technology, the observation of symmetry for the denominator, I have drawn to the conclusion that my statement is valid for all the values I have calculated and tested.