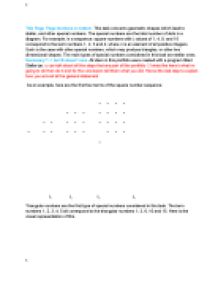 Title Page, Page Numbers on bottom. This task concerns geometric shapes which lead to stellar, and other special numbers. The special numbers are the total number of dots in a diagram. For example, in a sequence: square numbers with tn values of 1, 4, 9, and 16 correspond to the term numbers 1, 2, 3 and 4, where n is an element of all positive integers. Such is the case with other special numbers, which may produce triangles, or other two dimensional shapes. The main types of special numbers considered in this task are stellar ones. Necessary? > I bet IB doesn’t care. All stars in this portfolio were created with a program titled Stellar-jar. u can talk about all the steps that are part of this portfolio ☺ kinda like here’s what im going to do then do it and for the conclusion tell them what you did. Hence the last step to explain how you arrived at the general statement

As an example, here are the first four terms of the square number sequence:

a, b and c values will be given by the calculator.

Now the task asks that the above steps are repeated for other values of p, shown below. It must be noted that in order for a star to be formed, creating stellar numbers, the sequence must have a p value of at least 3, because at positive integer values of 1 and 2, a star is not formed. Therefore is an element or positive integers.

First p=5 is considered. Below are stages 1-6

(The 2nd differences are 2 times the p value; the recursion formula still applies, as well as other patterns are the same).

Yet, visually, only rhombii are formed, and therefore p=2 is inadmissible. Depends on how you define a stellar number. ☺

Overall this task helps to further ones understanding of special numbers and their properties. From the ones considered in this task, it seems that the equations for all special numbers that create two-dimensional figures, the equations are to the second degree. More investigation should be done to prove this.

I recommend italicizing your variables and learn to use the equation editor. (Alt =). Also, be sure to format this better, state restrictions on your final equations (so post calculations e.g. if you’re saying THIS IS THE EQUATION FOR THIS). Also, for testing validity, use numbers in equations to test backed up with reasoning.