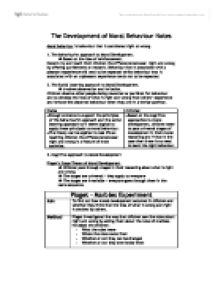 Revision notes on the Development of Moral Behaviour

The Development of Moral Behaviour Notes Moral behaviour is behaviour that is considered right or wrong. 1. The behaviourist approach to Moral Development. ==> Based on the idea of reinforcement. Parents try and teach their children the difference between right and wrong by offering punishments or rewards. Behaviour that is associated with a pleasant experience will tend to be repeated whilst behaviour that is associated with an unpleasant experience tends not to be repeated. 2. The Social Learning approach to Moral Development. ==> Involves observation and imitation. Children observe other people being rewarded or punished for behaviour and so develop the idea of what is right and wrong from others' experience and imitate the observed behaviour when they are in a similar position. Praise Criticism * Enough evidence to support the principles of the behaviourist approach and the social learning approach so it seems logical to apply these principals to moral behaviour. * The theory can be applied to real life as teaching children the difference between right and wrong is a feature of most societies. * Based on the cognitive approaches to moral development, children seem to pass universal stages of development in their moral reasoning and if that is the case then there is no need to learn the right behaviour. ...read more.

The drug was made by a local chemist, it was expensive to produce but the chemist was charging ten times what it cost him to make. The chemist wanted $2000 for a small dose but Heinz could only get together about $1000 - even though he had borrowed as much as he could from his friends. Heinz told the chemist that his wife was dying and asked him to let him have the drug for $1000 or to let him pay the remainder later. The chemist refused, saying that he had invented the drug and had a right to make a profit from it. Heinz became desperate and broke into the chemist's to steal the drug. Should Heinz have done this? Is the chemist right to charge what he likes? Should Heinz have done the same thing for a stranger? Results On the basis of the people's answers Heinz constructed a model: Level Stage Guiding Principal Level 1: Pre-conventional Stage 1 (Punishment / Obedience) The right thing to do is whatever gains a reward; the wrong thing to do is whatever is punished. Stage 2 (Instrumental) The right thing to do is whatever is in your own best interests. Level 2: Conventional Stage 3 (Interpersonal Concordance) ...read more.

Instead they concerned balancing our own needs with the needs of other people. She conducted investigations where she gave the participants little stories that were little dilemmas, asking them what they think the characters should do. - should I eat the last biscuit in the tin or leave it for George, who's has none? - Should I spend time helping this elderly person carry luggage up the steps when I may miss the train? - Should I offer to pay my friend for the lift home? From the answers, she constructed a theory based on a series of stages: Stage 1: Hedonistic Hedonistic means something that is concerned with satisfying our own needs. At this stage, people solve dilemmas by referring to what is best for them. Stage 2: Needs of others A swing from stage 1 to the opposite extreme. The needs of others are put first. Stage 3: Approval Based on stereotypes of moral behaviour - the sort of thing a comic hero would do. Stage 4a: Empathetic Empathy involves feeling the same thing as someone else is feeling. Based on an element of sympathy for the other person. Stage 4b: Transitional Based on a generalized but slightly vague idea that this is the right thing to do. Stage 5: Strongly Internalised A much stronger and clearer idea of what is right and an obligation to oneself to maintain standards of morals. ...read more.