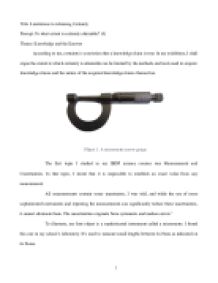 To what extent is certainty attainable? I shall argue the extent to which certainty is attainable can be limited by the methods and tools used to acquire knowledge.

ï»¿Title: Limitations to Attaining Certainty Prompt: To what extent is certainty attainable? (8) Theme: Knowledge and the Knower According to me, certainty is conviction that a knowledge claim is true. In my exhibition, I shall argue the extent to which certainty is attainable can be limited by the methods and tools used to acquire knowledge claims and the nature of the acquired knowledge claims themselves. Object 1: A micrometre screw gauge The first topic I studied in my IBDP science courses was Measurements and Uncertainties. In that topic, I learnt that it is impossible to establish an exact value from any measurement. All measurements contain some uncertainty, I was told, and while the use of more sophisticated instruments and repeating the measurements can significantly reduce these uncertainties, it cannot eliminate them. The uncertainties originate from systematic and random errors.1 To illustrate, my first object is a sophisticated instrument called a micrometre. ...read more.

My second object is a picture of Sir Andrew Wiles, the mathematician who became famous for his proof of Fermatâ€™s Last Theorem. In this picture, he can be seen standing in front of the theorem, which is written on a chalkboard, in his Princeton, N.J., office, back in 1998.2 While Wiles won the Abel Prize in 2016 for his ground-breaking proof of this notorious theorem, the circumstances surrounding the proof made me question the extent to which knowers can attain certainty in knowledge acquired through intuition and deduction; which are thought to be the two most reliable methods of acquiring knowledge. On June 23rd of 1993, after spending 7 years in solitude, believing he had finally done it, Wiles announced his proof to the world. But his proof contained mistakes that were discovered 3 months later. A year passed before Wiles managed to correct his proof. However, to this day, there are some prominent mathematicians, like Kevin Buzzard, that are convinced nobody really understands the full contents of ...read more.

My mother immediately harangued me on the folly of such disorganisation, asserting that â€œthe world has no place for disorganised peopleâ€ and when I explained to her the reason I was doubting, she informed me that even if I feel uncertain, I should not communicate it because most people have little tolerance for uncertainty. This object links to the prompt because it illustrates that knowledge claims regarding future events, so-called future contingents, are uncertain by nature, seemingly regardless of how they are acquired. Nevertheless, this object further illustrates that because of societal expectations to behave as if full certainty is attainable in communal knowledge, legitimate reasons to doubt claims are often ignored. Certainty functions in society as a subjective construct rather than an objective construct as I studied it in TOK. In conclusion, I have argued that from ways knowledge is acquired and the nature of acquired knowledge itself, it is plausible that full certainty is objectively unattainable. However, in society, full certainty is merely subjective and hence attainable. So, ultimately, to what extent certainty is attainable depends on whether objective or subjective certainty is in mind. ...read more.