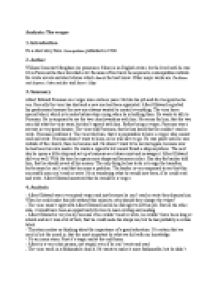 Analysis of &quot;The verger&quot; by William Somerset Maugham. (Text of story in Vietnamese).

﻿Analysis: The verger 1. Introduction It's a short story from Cosmopolitans published in 1936. 2. Author William Somerset Maugham (se pronounce Mom) is an English writer, but he lived until he was 10 in Paris and he then travelled a lot. Because of his travel he acquired a cosmopolitan outlook. He wrote novels and short stories which Rain is the best know. Other major works are The Moon and Sixpence, Cakes and Ales and Razor?s Edge. 3. Summary Albert Edward Foreman is a verger since sixteen years. He like his job and do it as good as he can. Recently the vicar has died and a new one had been appointed. Albert Edward regretted his predecessor because the new one always wanted to control everything. The vicar has a special talent, which is to make babies stop crying when he is holding them. He wants to talk to Foreman. He is surprised to see the two churchwardens with him. He seems for him, that the two men did what the vicar want, but don?t agreed with him. Before being a verger, Foreman was a servant in very good houses. The vicar told Foreman, that he has heard that he couldn?t read or write. Foreman confirms it. The vicar told him, that it is impossible to have a verger who cannot read and write. Foreman doesn?t want to learn, so he will have to go. He was polite until he was outside of the church, there he became sad. He doesn?t want to be servant again, because now he has been his own master. He wants a cigarette but cannot found a shop anywhere. The next day he opens a little shop and set up a business as a tobacconist and newsagent. Albert Edward did very well. With the time he opens more shops and becomes richer. One day the banker told him, that he should invest all his money. ...read more.

If, for example, we want to find a deeper sense of spirituality, then we must begin a search. If we do not want to feel apart from the Jewish community, then we have to join in the activities of a synagogue and other cultural and social institutions. If we want to harvest the fruits of our labors, then we have to plant seeds with care. If, the first word of Behukotai, is a powerful word that instructs a student of Torah how to be empowered. Question Answer Characterization- He wore it with complacence for it was the dignified symbol of his office, and with out it he had the disconcerting sensation of being somewhat insufficiently clad.? [Great Pride in work] (1st paragraph) Point of View- . ?There had been a Christening that afternoon at St. Peter?s Neville Square. And Albert Edward Foreman still wore his verger?s gown.? [Foreman is the main character, but it is in 3rd person] (1st paragraph) Events- Vicor speaking to verger (Foreman) ??You?ve been here a great many years and I think his lordship and the general agree with me that you?ve fulfilled the duties of your office to the satisfaction of every-body concerned.? [5th paragraph] (important) Theme- That?s the most extraordinary thing I ever heard.? ?And do you mean to say that you?ve built up this important business and amused a fortune of thirty thousand pounds without being able to read or write?? (last paragraph) Symbolism- Symbolism- Cigarette?s symbolize change and new beginning. ??He looks about himself for a shop where he could buy a packet of Gold Flakes?? Irony- ?Good God, man, what would you be now if you had been able to?...a little smile on his still aristocratic features. ?I?d be a verger of St. Peter?s Neville Square. ? (Last paragraph) structure Structure- The structure of the short story is extremely interesting. Maugham the author, did an excellent job of repetition when the verger, Albert, told a different person about his inability to read and write. ...read more.