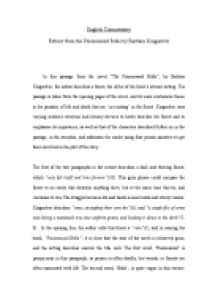 Commentary on the Opening Scene of &quot;The Poisonwood Bible&quot; by Barbara Kingsolver.

ï»¿English Commentary Extract from the Poisonwood Bible by Barbara Kingsolver In this passage from the novel “The Poisonwood Bible”, by Barbara Kingsolver, the author describes a forest, the début of the book’s ulterior setting. The passage is taken from the opening pages of the novel, and its main continuous theme is the paradox of life and death that are ‘co-existing’ in the forest. Kingsolver uses varying sentence structure and literary devices to better describe the forest and to emphasise its importance, as well as that of the characters described further on in the passage, in the storyline, and addresses the reader using first person narrative to get them involved in the plot of the story. The first of the two paragraphs in the extract describes a dark and thriving forest, which “eats life itself and lives forever”(10). This grim phrase could compare the forest to an entity that destroys anything alive, but at the same time thrives, and continues to live. The struggle between life and death is near brutal and utterly violent. Kingsolver describes “vines strangling their own kin”(6), and “a single-file of army ants biting a mammoth tree into uniform grains and hauling it down to the dark”(7-8). In the opening line, the author calls this forest a “ruin”(1), and in naming the book, “Poisonwood Bible”, it is clear that the tone of the novel is relatively grim, and the setting describes mirrors the title well. ...read more.

Adding on to the women?s other-worldliness, they are described as ?pale?(12), whereas they are walking in a tropical, most likely African forest, and native Africans are dark, the opposite of pale. Kingsolver uses phrases such as ?graceful hand?(24), ?false-pearl earrings?(16) and ?shirtwaist dresses?(12) to describe the way that the five appear and act, and this indicates that they are from an upper-class in society. Therefore, why they would be trudging through such a wild environment. As to why they would be in the forest, the simple solution might be that they are lost. However, that wouldn?t be right, as the mother is described as being ?deliberate?(15), which means that she knows where she is leading her daughters. The effect of this is that the reader feels as though he or she already has to begin piecing together a puzzle and making assumptions. Having said that, Kingsolver does not leave the reader totally ignorant, and she describes the five figures in a way that says a lot about them without excessive information being needed. ?Four girls compressed in bodies as tight as bowstrings, each one tensed to fire off a woman?s heart?(18-19) suggests that the girls are uncomfortable in their own bodies, and that they are uncertain of the future, as well as what they are doing at the present. ...read more.

From a high vantage point, it could be that they are spying on the women. However, Kingsolver wouldn?t let something like that be that obvious in the opening lines to her novel, and it is highly probable that she deliberately meant for the reader to feel as though he or she shouldn?t have seen this, when it was absolutely necessary that they did. Once more, the author is being manipulative in regard to the reader?s insight on information and opinion. Throughout the extract, Barbara Kingsolver describes the forest and the five women in great detail, constantly appearing to try and further the reader?s understanding of the matters presented. She uses a continuous paradox whilst describing the forest, and makes the women appear not to belong in the wild setting, creating the feeling that there is a double entendre to everything that she has written in the passage, that nothing is quite the way that Kingsolver says it is. She uses first person narrative to make the reader feel in control, but again, she manipulates and twists the truth, keeping certain things in the dark, and emphasising on others more, to make the reader believe half-truths. These opening paragraphs effectively catch the reader?s attention, and it seems that the only way to discover Kingsolver?s ulterior motive is to read the rest of the book. ...read more.