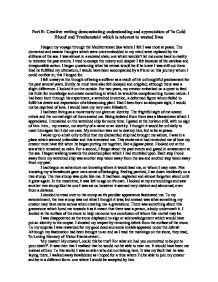 Part B- Creative writing demonstrating understanding and appreciation of 'In Cold Blood' and 'Frankenstein' which is relevant to wasted lives I began my voyage through the Mediterranean Sea where I felt I was most at peace. The demented and satanic thoughts which were once embedded in my mind were replaced by the stillness of the sea. I was almost in a sedated state; one which wouldn't let me come back to reality to reiterate the past events. I tried to escape the misery and despair I felt because of his careless and irresponsible action. I began questioning what his retreat would be if he knew I was still out there. Had he fulfilled my ultimatum, I would have been accompanied by a friend on this journey whom I could confide in; this I longed for. I felt uneasy at the thought of being a sufferer as a result of his unthoughtful predicament for the past several years. ...read more.

I woke up to a halt only to find that my dismantled ship had brought me ashore. I was in a place which seemed unfamiliar and this interested me. This excitement had reminded me of how my creator must have felt when he began putting me together, like a jigsaw piece. I looked out at the sea which remained so calm. For a second, I forgot about the past events and gazed in amazement at the sea. I began walking towards the deserted place which I had stumbled upon. Each step I took away from my wretched ship was another step taken away from the sea and another step taken away from my past. I had begun an adventure not knowing where it would lead me, or whom I may meet. Not knowing my whereabouts gave me a sense of belonging. Feeling parched, I sat down recklessly on a tree stump. The tree stump was quite like me. ...read more.

Although my fascination had been brought to an end as I read the markings on the stone, they read, 'In Loving Memory of Victor Frankenstein'... 'My master! My creator!, could this be true? For what sin had you committed to be put to your death?'. It was then that I realised that he would not be able to hear me. It should have been me instead of him. To this world I was an alien who did not belong here. It was my fault that he was laying there. I walked away bewildered as i hoped for a time where I'd be able to join my creator and be in a different form- one where I would be accepted by him. Short commentary about Part B My inspiration to write this piece of text came from the creature's feelings and emotions, which Mary Shelley had captured in Frankenstein. I felt that they were quite important in the novel and related to wasted lives well. My intention was to write a short diary entry from the creature's perspective as a possible extension to the novel which expressed the wasted life that the creature may have had. ...read more.