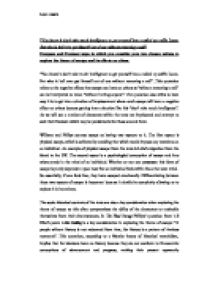 &quot;Glass Menagerie&quot; and &quot;The Final Passage&quot;. Compare and Contrast ways in which you consider your two chosen writers to explore the theme of escape and its effects on others.

Amanda reminisces about her former southern-belle glory days, filled with pleasant walks and gentleman callers and clings to the values and ideals of her former lifestyle. This is notably absurd because there is a powerful juxtaposition between the social prestige of her former lifestyle as a southern-belle and her present lifestyle. This self-reflection by Amanda on her former social status allows her to draw an increased sense of importance from her former glory, allowing her to momentarily escape from harshness of her present reality which is bitter in comparison to the fairytale-like serenity of 'Blue Mountain'. This escapism is used as Amanda's escape from the 'enslaved section of American society...burning with the slow implacable fires of human desperation'. Amanda's means of escape to the past is used by Williams to highlight that escape has an emotional aspect to it. Despite Amanda physically being in a place of 'human desperation' she is able to become emotionally free through her escapism. Amanda seemingly has no desire for physical escape and finds her freedom solely in her mental escape to the past. Although, it could be said that Amanda's attempt to escape emotionally does not truly free her from the bitter realities of her life as she still advises her son Tom that it takes "Spartan endurance" to cope with her problems and by her own admission "life's not easy". ...read more.

Both Michael and Tom are in pursuit of a better life for themselves as they define it. Tom is in pursuit of "adventure" and Michael is in pursuit of "opportunity" but in both texts these pursuits, or manifestations of freedom, are of detriment to their respective families. To conclude both writers show escape as a multi-faceted concept, with it being necessary to achieve emotional escape as well simply physical escape to achieve true freedom. In the Glass Menagerie, Tom and Amanda cannot achieve freedom "without removing a nail". Tom is physically but it has come at the cost leaving his family financially unstable and Amanda is arguably emotionally free but this emotional freedom comes at the expense of hurting Laura and irritating Tom. In The Final Passage it could be argued that all those who remain on the island as are not free because there is an implication by Philips that those on the island are "a people without history...not redeemed from time" and are thus bound within the seemingly unchanging nature of their society. However, as Leila, Michael and Calvin have left the island and have come to England, which is a culture with "history" in a Eurocentric perception, they are thus free from the "timeless" island. So at least now they have the potential to become free if they should so choose but if one rejects the assumption that the islanders are bound within time then perhaps all those on the island were free all along. ?? ?? ?? ?? Leon Asare ...read more.