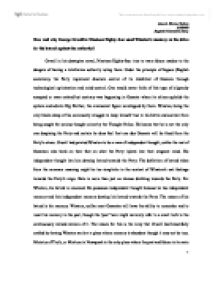 How and why George Orwell in Nineteen Eighty-four used Winstons memory as the drive for his hatred against the authority?

How and why George Orwell in Nineteen Eighty-four used Winston's memory as the drive for his hatred against the authority? Orwell in his dystopian novel, Nineteen Eighty-four tries to warn future readers to the dangers of having a totalitarian authority ruling them. Under the principle of Ingsoc (English socialism), the Party implement absolute control of its inhabitant of Oceania through technological optimization and mind-control. One would never think of this type of oligarchy accepted or even existed but contrary was happening in Oceania where its citizen upholds the system and admire Big Brother, the omniscient figure worshipped by them. Winston, being the only black sheep of his community struggle to keep himself true to his battle and survive from being caught for serious thought crime by the Thought Police. He knows that he is not the only one despising the Party and certain he does feel that one day Oceania will be freed from the Party's claws. Orwell had painted Winston to be a man of independent thought, unlike the rest of Oceanian who bank on their fact on what the Party injects into their stagnant mind. His independent thought lets him develop hatred towards the Party. The definition of hatred taken from the common meaning might be too simplistic in the context of Winston's real feelings towards the Party's reign. Hate is more than just an intense disliking towards the Party. For Winston, his hatred is reasoned. He possesses independent thought because he has independent memory and this independent memory develop his hatred towards the Party. The reason of his hatred is his memory. Winston, unlike most Oceanian still have the ability to remember and to recall his memory in the past, though the 'past' here might narrowly refer to a small truth to the continuously revised version of it. The reason for this is the irony that Orwell had beautifully crafted by having Winston work at a place where memory is abundant though it may not be true. ...read more.

Winston's dreams constitutes a major part of his memory, perhaps because he is unable to have any substantial event occurring in his everyday life for as a matter a fact, Winston is just an everyman, differing from everybody around him only by his sheer ability to think independently. Another possible explanation is that he despises the Party so much that he chooses not to remember anything that happens in his dull and uninteresting life under the Party's watch. Therefore it suits the context to discuss his dreams as the modus of how his memory is put to use by Orwell to fuel his rage upon the governing Party. Winston had several dreams throughout the story and also amassed from his flashbacks. For instance, his dream of hearing O'Brien's voice telling him that they "shall meet in the place where there is no darkness" (Orwell, 2008, p. 27) actually made him believe that the place with no darkness refers to the period when the Party has fallen in the hands of the Brotherhood. He concentrates too much on believing that the prophecy in his dream will turn out to be true which was later revealed to be false. The place of no darkness is actually the Ministry of Love or Miniluv where the light was never turned off. His inclination to put his trust in O'Brien had brought damnation to himself, though it was not actually a surprise to him since he, before the arrest have been holding to a fatalistic view of himself. The peak of Winston's hatred was in the torture room with O'Brien when the latter, whom he altruistically regard as the only person who understands him breaks his every resolve and question about the Party. The Party, as how it appears from O'Brien's explanation to be infallible because "The Party seeks power entirely for its own sake." (Orwell, 2008, p. 275) ...read more.

He enjoyed Julia's company because beautiful memories are created when they were together. Orwell used this strong emotional relationship of memory to send a message that it will be the last thing that could be stripped off a human being and make one inhumane. This was clearly shown at the remaining pages of the novel when Winston was already brainwashed and had already gain acceptance of the world in O'Brien's perspective, but he had one thing left in him that prevent his total submission to the Party: his love for Julia and not Big Brother. "Julia! Julia! Julia, my love! Julia!" (Orwell, 2008, p. 293) was his exclamations which later doomed him to Room 101. He was eventually released and the ending clearly demonstrates his defeat he declared that "He loved Big Brother." (Orwell, 2008, p. 311) In conclusion, Winston's memory in Nineteen Eighty-Four was manipulated to instill pain in him both physically and mentally which have sprouted the hatred long since he was still a little kid. The memory also haunts him in the form of visionary dreams which contributes two contrasting effect to himself, a contented affair with Julia and his damnation to the hands of O'Brien. This two contrasting effect had nonetheless fuels a larger fire in him towards the injustice and corruption within the Party. Winston who was poised with his ability to access memory freely and thinks independently runs his personal investigation of the past out of his curiosity. Orwell uses his curiosity and his reasoning characteristics to provide a bridge between the past and his hatred towards the party and how he had evolved together with his memory to provide a cause for his loathing. It was also shown that memory is the last thing that defines humanity and thus defined Winston and his ideology as the last sane human on Earth. This is perhaps what the writer tries to propagate with his original title of the novel, 'The Last Man in Europe'. ...read more.