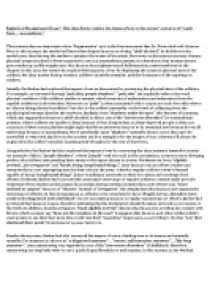 How does Barker explore the impact of war in this extract from &quot;Regeneration&quot;-extract p.10 Light from..neurasthenic

﻿English Lit Passage-based Essay:? How does Barker explore the impact of war in this extract?-extract p.10 ?Light from?..neurasthenic? This extract plays an important role in ?Regeneration?, as it is the first encounter that Dr. Rivers had with Sassoon. Prior to this excerpt, the reader had learnt that despite Sassoon not being ?shell-shocked?, he had thrown his medal away, thus leaving the reader to question the extent of his sanity. Moreover, as this extract consists of many physical symptoms that Dr Rivers expected to see in a neurasthenic patient, it is therefore a key excerpt since it gives readers possible insights into why Sassoon has nightmares and hallucinations, mentioned later in the chapter. In this case, the extract has explored the impacts of war by displaying the common physical state of the soldiers, the class system during wartime, soldiers? unstable mentality, and the dominance of the superego in soldiers. Initially, Pat Barker had explored the impact of war in this extract by portraying the physical state of the soldiers. ...read more.

Evidently, Barker had conveyed this insensitive stereotype of regular soldiers to intentionally provoke resentment from readers at this unjust class system during wartime. Despite that, as Dr. Rivers was ?more inclined to suspect? Sassoon of ?shyness? instead of ?arrogance?, this emphasizes that Sassoon goes against the stereotype of officers. In this circumstance, as officers were considered to have ?fragile nerves, therefore more easily to be diagnosed with shellshock?, by not associating Sassoon to regular mannerisms of officers, Barker had portrayed that Sassoon is sane, therefore indicating that his Declaration should be taken seriously as it consists of the truth. In addition, besides arrogance, ?head slightly averted? denotes that Sassoon is avoiding eye contact with Rivers; which as many say ?Eyes are the windows to the soul?, it suggests that Sassoon and other soldiers didn?t want people to see their fear since this would ruin their ?masculine? impression, as according to the line ?war that shattered their pride? from Sassoon?s poem, Survivors. Besides these points, Barker had also conveyed the impact of war as leading men to be insane and mentally unstable. ...read more.

Furthermore, the whole sentence ?no twitches?no repeated ducking? and ?his hands?.perfectly steady? consists of a list-like structure, inferring a methodological approach to neurasthenia. More specifically, this can be a metaphor for the disciplined character of soldiers and the dominance of their superego as a result of their training with draconian officers. In this case, likewise to a methodological approach, the soldiers weren?t allowed to let emotions influence their decisions, thus accentuates how some headquarters have become callous due their desire of winning the war, as well as the repression of the id, whereby Freud believes was the main cause to nightmares and hallucinations. In summary, Barker had explored the impacts of war in a myriad of ways, including the weak physical condition of soldiers, the class system in wartime society, the soldier?s insanity and the dominance of their superego. Nonetheless, the most important aspect of this excerpt was her exploration of the theme ?How can we differentiate between the sane and insane?, whereby she used Sassoon as an example of the blur lines between these two elements. ...read more.