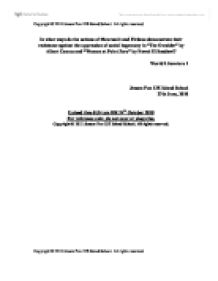 In what ways do the actions of Meursault and Firdaus demonstrate their resistance against the oppression of social hegemony in The Outsider by Albert Camus and Women at Point Zero by Nawal El Saadawi?

This is seen in, "I realized I had been afraid...until the fleeting moment I read fear in his eyes."7 She also suggests that the nature of men's control over women is tenuous and that women are equally as violent as a man can be, as seen in, "I was astonished to find how easily my hand moved as I thrust the knife into his flesh, and pulled out almost without effort."8. She further prove this by threatening the Arab prince as seen in, "...I lifted my hand high up above my head and landed it violently on his face."9 The action of Firdaus suggest that by killing a man she has effectively become immune to intimidation from men as she is equally capable of violence. Therefore, it is apparent that at this point of the story Firdaus has liberated herself economically, physically and psychologically from the patriarchal oppressions of her society. Copyright (c) 2011 Jensen Pon 13E Island School. All rights reserved. Firdaus's ultimate form of resistance against the social hegemony is self-sacrifice. Her defiance to conform to patriarchal expectations ultimately leads to her execution. Although it is apparent that this death does not liberate her physically, her execution vindicates her philosophy and serves as a rationale to justify her actions in life. Firdaus was given a chance to be released but talked back to the authorities and expressed her desire to die than live as seen in, "...I have triumphed over both life and death because I no longer desire to live, nor do I any longer fear to die."10 Even though she realizes ...read more.

As seen in "The Outsider" where the prosecutor said, "I asked for this man's head, and I do so with an easy mind...never before have I felt this onerous task so fully compensated and counter balanced...enlightened by a sense of urgent and sacred duty..."21Although Meursault was aware of the fact that his philosophy was seen as an existential threat, he was glad to die for his cause as seen in "...laid myself open to the benign indifference of the world...I realized I'd been happy, and that I was still happy....For the final consummation...my last wish was that there should be a crowd of spectators at my execution and that they should greet me with cries of hatred."22 Copyright (c) 2011 Jensen Pon 13E Island School. All rights reserved. In conclusion, both novels can be read as sustained acts of resistance against social hegemonies. It has been illustrated that Firdaus's resistance is against a patriarchal society and it has been shown through her. Meursault's act of resistance was directed against an oppressive social code based on Christian morality that Meursault could not believe in. Despite the benefits that he would have gained for even lying about this feeling, he refused. It could be argued therefore the very existence of Firduas and Meursault was an act of resistance, as they both present an "outsider" that challenges the hegemony of the oppressive regimes. Both characters revealed through various acts of resistance that they could not be controlled or manipulated by the oppressive forces of society. Copyright (c) 2011 Jensen Pon 13E Island School. All rights reserved. ...read more.