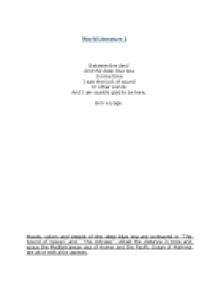 Moods, colors and people of the deep blue sea are portrayed in The Sound of Waves&quot; and &quot; The Odyssey&quot;.

﻿World Literature 1 Between the devil And the deep blue sea In lime time I saw the look of sound In other worlds And I am scantly glad to be here, Bon voyage. Moods, colors and people of the deep blue sea are portrayed in ?The Sound of Waves" and " The Odyssey". Albeit the distance in time and space the Mediterranean sea of Homer and the Pacific Ocean of Mishima are alive with alike aspects. The Odyssey, epic poem written by the blind Homer in ancient Greek around 700 B.C. narrates the heroic story of Odysseus and his adventures at sea. The sound of waves, Japanese novel of Yukio Mishima portrays the course of love between two young habitants of Uta-Jima, the song island that ?lies directly in the straits connecting the gulf with the Pacific Ocean?.[1] Both books, the first being a poem, and the second for the gentle rate of words chosen to describe the sea put great emphasis in the poetry of the sea?s essence and effects. The sea is portrayed, in its descriptions with the use of a great range of metaphors, colors and symbols. Homer defines the sea as being very different according to the circumstances. The adjectives are strong, like ?wild sea?[2], and give a powerful overview of the mighty sea. In his descriptions, the Mediterranean can be a ?grey? ?high wind sea? [3] with ?dark water?[4] and ?Grey ocean tides?[5], a ?fathomless unresting sea?[6] but also a noble, ?great sea?[7], a ?misty sea?[8]. He uses repetition to give the idea of a ?wine dark sea[9]? used in books I, II, IV, V, VII, XII and XIII. Other colors are used to make the reader picture the ?grey sea[10]?, ?the deep blue sea[11]?, ?the violet sea[12]? and ?the salt blue sea?[13]. Whereas, Mishima describes it as being a ?calm sea?[14] with ?cold waters?[15] at times. He uses personification to give us an image of ?the sea shaped like some amorphous, mysterious helmet.?[16] He doesn?t differ as ...read more.

153. ?We saw death in that fury,dropped the yards, unshipped the oars, and pulled from the nearest lee: when two long days and nights we lay offshore worn out and sick at heart?(l.79,b.IX) 154. ?Nine days i drifted on the teeming sea before dangerous high winds.?(l.90,b.IX) 155. ?We landed there to take on water.?(l.93,b.IX) 156. ?My oarsmen dipped their long oars in the surf, and we moved out again on our sea faring?(l.111,b.IX) 157. ?Some god guided us that night, for we could barely see our bows in the dense foga round us, and no moonlight filtered through the overcast.?(l.153,b.IX) 158. ?My oarsmen followed, filing in to their benches by the rowlocks, and all in line dipped oars in the grey sea.?(l.191,b.IX) 159. ?Or are you wandering rogues, who cast your lives like dice, and ravage other folk by sea??(l.276,b.IX) 160. ?We are from Troy, Akhaians, blown off course by shifting gales on the great South Sea?(l.281,b.IX) 161. ?Poseidon Lord,who sets the earth a-tremble,broke it up on the rocks at your land?s end. A wind from seaward served him, drove us there.?(l.308,b.IX) 162. ?They all pitched in at loading, then embarked and struck their oars into the sea.?(l.515,b.IX) 163. ?Ahead of our black prow it struck and sank whelmed in a spuming geyser, a giant wave that washed the ship stern foremost back to shore.?(l.526,b.IX) 164. ?But i fell short,just aft the steering oar, and whelming seas rose giant above the stone to bear un sonward toward the island.?(l.591,b.IX) 165. ?The trim ships dawn up side by side,and all our troubled friends who waited, looking seaward.?(l.595,b.IX) 166. ??Feast on mutton and sweet wine, till after sunset in the gathering dark we went to sleep above the wash of ripples.?(l.609,b.IX) 167. ?Cast off the mooring lines; and filing in to sit beside the rowlocks oarsmen in line dipped oars in the grey sea.?(l.613,b.IX) 168. ?An isle adrift upon the sea,ringed round with brazen ramparts on a sheer cliffside.?(l.4,b.X) ...read more.