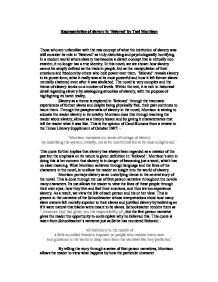 Representation of slavery in 'Beloved' by Toni Morrison

Representation of slavery in 'Beloved' by Toni Morrison Those who are unfamiliar with the raw concept of what the institution of slavery was will consider its role in 'Beloved' as truly disturbing and psychologically horrifying. In a modern world where slavery has become a distant concept that is virtually non-existent, it no longer has a true identity. In this novel, we are shown how slavery cannot be simply defined as the trade in people, but as the manipulation of their emotions and freedom by others who held power over them. 'Beloved' reveals slavery in its purest form, what it really was at its most powerful and how it left former slaves mentally shattered even after it was abolished. The novel is very complex and the theme of slavery works on a number of levels. Within the text, it is rich in historical detail regarding slavery by cataloguing atrocities of slavery, with the purpose of highlighting its harsh reality. Slavery as a theme is explored in 'Beloved' through the traumatic experiences of former slaves and despite being physically free, their past continues to haunt them. Through the paraphernalia of slavery in the novel, Morrison is aiming to educate the reader slavery in its totality. Morrison does this through teaching the reader about slavery, almost as a history lesson and by giving it characteristics that tell the reader what it was like. ...read more.

This is certainly true of Schoolteacher who seems to command respect as he feels superior, however, by doing this he is just proving how inhumane people like him are and in spite of his education the slaves are superior to him. Sethe is left psychologically scarred by the trauma of what was inflicted upon her and will not allow her children to suffer like she had as a slave: - 'That anybody white could take your whole self for anything that came to mind... Dirty you so bad you couldn't like yourself anymore. Dirty you so bad you forgot who you were and couldn't think it up.. the best thing was, her children. Whites might dirt her all right, but not her best thing'. The repetition of 'Dirty you..' calls attention to Sethes feelings of her no longer being herself anymore. So when the threat of Schoolteacher taking her 'best thing' away from her into a world she did not want her children to experience, she makes the ultimate decision. Sethe was determined not to allow Schoolteacher take her children: - 'I have felt what it felt like and nobody.. is going to make you feel it too. Not you, not none of mine, and when I tell you you mine, I mean I'm yours.' ...read more.

Forgetting is repeated again in the chapter to emphasize its importance and making the past into 'an unpleasant dream'. It is through Beloved that Sethe finds an inner peace. Morrison is reinforcing the message to many black Americans that like Sethe they must achieve their own inner peace. They must learn to forget the past as stated 'Remembering seemed unwise.', so to remember the past will achieve nothing but looking to the future they will also achieve their own freedom. Morrison emphasizes the need for the black community not to teach the future generations the mistakes of the past through repetition of the single line 'It was not a story to pass on.'at two separate points of the chapter. The characters in the novel that had any contact with Beloved did this as they realised that to remember too much would be a mistake. In a paragraph after the second time this line is repeated, Morrison warns the black American reader: - 'This is not a story to pass on'. This single statement is of a much more blunt and threatening tone and acts as a final warning. Essentially, what Morrison is saying is that eventually the past can be forgotten and then a future can be achieved. Slavery was their past and not the future. It was harsh and brutal for their forefathers whom were the victims of an inhumane institution but that doesn't mean the future has to be their past too. ...read more.