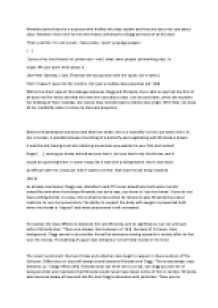 ﻿Miranda claims that she is a person who dislikes the class system and that she does not care about class. However, from time to time she shows contempt for Clegg and most of all his class: ?That?s not fair. I?m not a snob. I hate snobs. I don?t prejudge people.? [?] ?Some of my best friends in London are ? well, what some people call working class. In origin. We just don?t think about it.? Like Peter Catesby, I said. (That was the young man with the sports car?s name.) ?Him! I haven?t seen him for months. He?s just a middle-class suburban oaf.? (40) Within the short span of this dialogue between Clegg and Miranda, she is able to say that she first of all does not like snobs and that she does not care about class. Just seconds later, when she explains her disliking of Peter Catesby, she cannot help mentioning his middle-class origin. With that, she loses all her credibility when it comes to class and prejudice. Before the attempted seduction and after her death, she is a ?butterfly? to him, but when she is ill, she is human. ...read more.

Both these themes are crucial to the psychological warfare that will be waged between the two characters throughout the rest of the novel. Miranda Grey and Frederick Clegg are the main characters that are interpreted in the text The Collector, by John Fowles. Both characters correspond to different classes in society. John Fowles uses the concept of the implied reader, in which he 'speaks to' a specific reader in mind in an attempt to have the story interpreted in a particular way. Fowles expects us to read Miranda as an intelligent, mentally independent being part of the upper class, but at the same time, an arrogant "...liberal humanist snob" (Radhakrishna Rao, www.freshlimesoda.com/reviews/thecollector.html). The use and lack of several literary techniques, point of view, allusion, and Heraclitian philosophies encourages this intended response I hold towards Miranda. Fowles' various writing techniques promoted the interpretation that Clegg is part of the lower class and as a result is a victim of the mind, unable to expand his thoughts or feelings. It is because of this that he finds it hard to see between what is morally correct, and what is not accepted. ...read more.

Nobody will ever know about this except us." I can't, I said. Not now. I felt like a cruel king, her appealing like she did. "If you let me go now I shall begin to admire you. I shall think, he had me at his mercy, but he was chivalrous, he behaved like a real gentleman." I can't, I said. Don't ask. Please don't ask. "I should think, someone like that must be worth knowing." She sat perched there, watching me. I've got to go now, I said. I went out so fast I fell over the top step. She got off the drawers and stood looking up at me in the door with a strange expression. "Please," she said. Very gently and nicely. It was difficult to resist. It was like not having a net and catching a specimen you wanted in your first and second fingers (I was always very clever at that), coming up slowly behind and you had it, but you had to nip the thorax, and it would be quivering there. It wasn't easy like it was with a killing-bottle. And it was twice as difficult with her, because I didn't want to kill her, that was the last thing I wanted. ...read more.