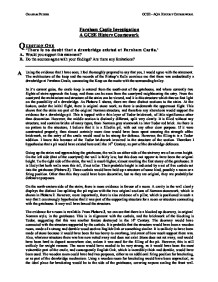 Farnham Castle Investigation A GCSE History Coursework Q UESTION ONE 'There is no doubt that a drawbridge existed at Farnham Castle.' A. Would you support this statement? B. Do the sources agree with your findings? Are there any limitations? A Using the evidence that I have seen, I feel thoroughly prepared to say that yes, I would agree with the statement. The architecture of the keep and the records of the Bishop's Rolls convince me that there was undoubtedly a drawbridge at Farnham Castle, connecting the Keep on the motte with the surrounding bailey. In it's current guise, the castle keep is entered from the south-east of the gatehouse, and where currently two flights of stairs approach the keep, and these can be seen from the courtyard neighbouring the entry. From the courtyard the architecture and structure of the stairs can be viewed, and it is this structure which throws first light on the possibility of a drawbridge. As Picture 1 shows, there are three distinct sections to the stairs. At the bottom, under the initial flight, there is original stone work, as there is underneath the uppermost flight. This shows that the stairs are part of the original Norman structure, and therefore any alterations would support the evidence for a drawbridge pit. This is topped with a thin layer of Tudor brickwork, of little significance other than decoration. However, the middle section is distinctly different, split very clearly. It is filled without any structure, and contains bricks of many types, from Norman grey stonework to later Tudor red brick. As there is no pattern to the structure, I believe that it is a filled-in pit, with out any other clear purpose. If it were constructed properly, then almost certainly more time would have been spent ensuring the strength of the brickwork, as the entry of the castle would need to be strong for defence. ...read more.

The plan of the castle, a top-down diagrammatic map, shows the age of many walls and foundations, including the gatehouse, stairs, and turrets. It is very limited as it is very sparsely annotated, labelling only a few of the more important sites on the site. However, the shadings (referring to the age of each part of the castle) are in keeping with my hypotheses. For example, most of the castle is built in the late 12th Century, yet the shading of the stairs conveys that the site of the pit was built up at a later date to the stairs and keep. Finally there is an excerpt from the Keep's own guidebook, by Mr. M. W. Thompson, a known historian. His testimony agrees with what I have found perfectly, making direct association to some of the points I have mentioned. "There are frequent references to the bridge in the manorial accounts, while others to the 'mantell' probably refer to the projecting superstructure" Although the source is secondary, much like that of the anonymous historian, the fact that the selection is from an official guidebook makes the source particularly trustworthy - a guidebook must be well researched to have any use to visitors. Therefore I believe this source to be fairly trustworthy. There are a few limitations to this however. It comes down to a lack of intricate detail - there is no reference to the working of the drawbridge, or the rectangular markings on the front of the gatehouse. All in all the sources differ a lot in their opinions, with the Rolls being vague yet confirming the drawbridge's existence, the guidebook being clear and particular in it's view, and the anonymous quote being very one-sided and unaccommodating of the evidence against it. The plan, though poorly labelled, is accurate in the information it provides. Q UESTION TWO 'Farnham Castle Keep was simply a place of defence.' ...read more.

The keep is traditionally positioned on high ground, vital for any castle or defensive point. This immediately shows that the castle must have been in some way defensive. The ditch, though very shallow, is a defensive, drawing attackers into an area where the batters can be used to full effect, and archers have easy shots on the offensive army. Finally, the keep is in a very defensive position. It is founded deep in the mound, and cannot therefore be undermined by the attackers. Its position in the centre of an excellent defence makes it a defensive stronghold. Also it held meats and other stores, in its cool, dark, and damp environment, where they would have kept for months. This mix of heavy defence and domestic features makes it an excellent place to withstand a siege. The cornerstones inside the well-shaft, which mark individual floors, can be seen in Picture 13) From my substantial evidence I can quite easily deduce that Farnham Castle was never simply a place of defence. The castle has always accounted for a need for people to live within it, slowly evolving from a mainly defensive castle to become a home in the 16th and 17th centuries. B There are four sources associated with this question, and all four agree in some way. This is unfortunately marred by the fact that all four are limited in some way or another. The first source is an excerpt from the Bishops Rolls from the years 1210 to 1299, on the matter of fences and some domestic buildings on the castle grounds. Also included is a letter from an Arthur Oswald to a Reverend Huband, concerning an article in a magazine called Country Life; dated June 22nd 1934. The second source is a long monologue from the Castle's official guidebook by M. W. Thompson. Thirdly is an extract from a book called Farnham Castle, The Forgotten Years, by P. D. Brooks. Finally there is a print made from an engraving in this book, showing Farnham Castle in 1737. The most reliable source I have backs up my hypotheses excellently. ...read more.