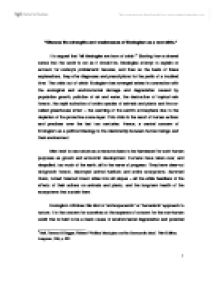 "Discuss the strengths and weaknesses of Ecologism as a new ethic." It is argued that "all ideologies are born of crisis."1 Starting from a shared sense that the world is not as it should be, ideologies attempt to explain or account for society's problematic features, and then on the basis of these explanations, they offer diagnoses and prescriptions for the perils of a troubled time. The crisis out of which Ecologism has emerged arises in connection with the ecological and environmental damage and degradation caused by population growth, pollution of air and water, the destruction of tropical rain forests, the rapid extinction of entire species of animals and plants and the so-called greenhouse effect - the warming of the earth's atmosphere due to the depletion of the protective ozone layer. This crisis is the result of human actions and practises over the last two centuries. Hence, a central concern of Ecologism as a political ideology is the relationship between human beings and their environment. Men tend to see nature as a resource base to be harnessed for such human purposes as growth and economic development. Humans have taken over, and despoiled, too much of the earth, all in the name of progress. They have clear-cut old-growth forests, destroyed animal habitats and entire ecosystems, dammed rivers, turned forested mount sides into ski slopes - all the while heedless of the effects of their actions on animals and plants, and the long-term health of the ecosystems that sustain them. ...read more.

The social sophistication that appears to set man apart from all other animals is really no more than a product of cognitive and emotional complexities, the elements of which man shares with other mammals (primates in particular). Many such animals display some of the same characteristics, which define man's life as special - such as social habits, communicative skills, and an ability to plan for one's own, or another's benefit. Both Regan or Singer, however, fail to include other parts of the ecosystem, such as 'low-order' animals, like insects for example, or plants and micro-organisms. Further ecological ethic, seeks less restrictive attributes for non-human entities than either a degree of mental complexity or sentience. Lawrence Jonhson, for instance, argues that organisms and collections of organisms have well-being needs, and therefore an interest in having them met. This 'well-being interest' is the attribute, which accords moral significance to those entities said to posses it. This applies to the whole environment and grants moral consideration to species and ecosystems as well as human beings. It therefore can be said to cover Aldo Leopold's statements of a 'land ethic', for "all ethics so far evolved rest upon a single premise: that the individual is a member of a community of interdependent parts. His instincts prompt him to compete for his place in that community, but his ethics prompt him also to co-operate ...The land ethic ...read more.

"wilderness"15 point of view argue that "a thing is right when it tends to preserve the integrity, stability, and beauty of the biotic community. It is wrong when it tends otherwise."16(Aldo Leopold, 1949) Furthermore, Ecologism is undermined by the idea that such an ethics can only be successful if a more profound and general shift toward an ecological consciousness develops. For an ecological ethic to fully succeed, individuals have to develop a conscience that not only prevents them from damaging the environment, but actually acting in favour of its preservation and well being. It is a consciousness that has to become part of their every-day lives and activities. This does not imply the necessity of protest and violent acts of reprehension against those who do not comply, but the education of the public, through speeches and more importantly, through schools. On a private level, education should begin within the household. Parents should also teach their youngsters not to pollute the streets and lakes, separate the waste and not to torture their pets. On a more national level, governments would also have to commit more vigorously by employing new and more meaningful legislation and enforcing them. In conclusion, the evolution of Ecologism as an ethic is an intellectual and emotional process. The mechanism of operation is the same for any ethic, namely social approbation for right actions and social disapproval for wrong actions. ...read more.