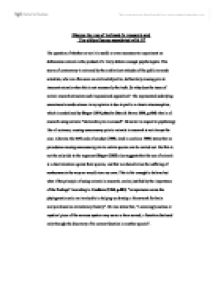 Discuss the use of Animals in research and The ethical issues associated with it?

Discuss the use of Animals in research and The ethical issues associated with it? The question of whether or not it is useful or even necessary to experiment on defenceless animals is the product of a lively debate amongst psychologists. This storm of controversy is mirrored by the ambivalent attitudes of the public towards scientists, who are often seen as cold and objective, deliberately causing pain to innocent animals when this is not necessarily the truth. So why does the issue of animal research stimulate such impassioned opposition? The represented underlying uneasiness towards science in my opinion is due in part to a classic misconception, which is underlined by Singer (1974,cited in Olen & Barry 1994, p.404) that in all research using animals "intolerable pain is caused". However in respect to psychology like all sciences, causing unnecessary pain to animals in research is not always the case. Likewise the BPS code of conduct (1998, cited in coolican 1999) states that no procedures causing unnecessary pain to certain species can be carried out. But this is not the only side to the argument Singer (1993) also suggests that the use of animals is a discrimination against their species, and that we should value the suffering of nonhumans in the way we would view our own. ...read more.

Studies using rats can be generalised effectively to humans because "the genetic make up of stimulus response contingencies are similar to that of the human make up" Skinner (1974, cited in Coolican 1999 p.486). Therefore by showing supporting evidence that the use of animals in research has helped us to understand human stress and anxiety, would we not agree that the use animals to gain such knowledge be justified due to the significance of the findings? In accordance, the findings of Langston (1986, cited in Pinel 2000) highlighted a needed area for research into Parkinson's disease, the MPTP model known as (1-methyl-4-phenyl-1, 2, 3, 6-tetrahydropyridine) is used on primates and was accidentally discovered in the use of 'synthetic heroin'. Langston discovered that primates respond like humans to MPTP, in that their brains display cell loss in the substania niagra, similar to that of Parkinson sufferers, and that the level of dopamine is greatly reduced. This discovery has already benefited numerous patients with Parkinson's disease as they found that deprenyl, a monoamine blocks the effects of MPTP in primates, and was subsequently shown that when administered early to Parkinson's patients significantly reduces the progression of the disease. Pinel (2000 p.254) suggested "studying an animal is like exploring an unknown maze, because experimentation necessary to identify the neuropathological basis of human neuropsychological diseases is impossible on patients themselves, animal models play an important role in such investigations". ...read more.

not to mention subjecting them to a neuropathological disease in order to find a cure, when in most cases we enter the process " with little more than a hope that its exploration will prove fruitful" Pinel (2000, p.254). Should we therefore regard speciesism more seriously than we do, especially when in experiments on humans where no consent obtained is regarded as unacceptable? I think that the answer to the question depends at least in part on ones own view regarding the cost/benefit analysis of the research, in one opinion "we should stop causing this unnecessary pain to animals" Singer (1974, cited in Olen & Barry, p.404) but for others "it is this research that proves significant in leading us a step further to the goals of understanding and prevention of disease" Pinel (2000, p.254). Can we actually isolate the answer to a question, a perceived myth, prevailing for hundreds of years, one that from an evolutionary perspective could enhance the health and survival of thousands of future generations? If so then I side with those who believe that the expense of one or even a dozen animals in doing so can be more than justified and in accordance with the consideration of interests we should understand that in the sacrifice of one being, the survival of another is equally important. ...read more.