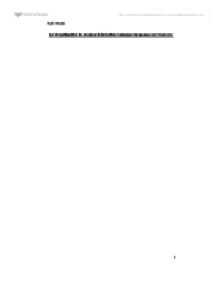 An investigation to analyse interaction between language and memory ABSTRACT The following experiment is a modification of the Loftus & Palmer experiment. This measures the difference in responses in the 'smashed' and 'bumped' condition after participants are subjected to reading a passage describing a accident. 60 participants were selected out of which 30 were male and 30 female. Equal no. of participants of each s*x were subject to both the conditions. The results supported the hypothesis that the mean score in the 'smashed' condition will be higher than that of the 'bumped' condition. INTRODUCTION Eyewitness testimony plays an important role in the criminal justice system. Many cases have been given a judgement purely on the basis of eyewitness testimony. Numerous cases of mistaken identification have led to grave concern in the society. Not only does the government have to provide huge monetary compensations but the life of the convict and his family is very severely affected. It is at such times when one wonders how important it is to go on false evidence and punish the innocent for a crime and put society at peace until finding that the convict was innocent. This led to research in the loop holes of eyewitness testimony and how they can be avoided. Kassin, Ellsworth & Smith (1989) ...read more.

The participants were asked to answer the question which asked them to give an estimate of the blood alcohol content of the person in the accident. The only difference was that in condition one the word used in the passage and question was 'bumped' and in condition 2 it was 'smashed'. It was made sure that there were equal numbers of male and female participants. From the 30 male 15 underwent condition 1 and 15 condition 2. Similar was the case with the females. RESULTS The mean no. of digits typed in the bumped condition was 138.33 (sd=45.02), whereas the mean no. of digits types in the smashed condition was 195.03 (sd=61.78). This difference was found to be significant using an independent samples t -test , t(58)= 4.06, p<0.001 N Mean Score Standard Deviation bumped 30 138.33 45.016 smashed 30 195.03 461.776 t-test for Equality of Means T df Sig. (2-tailed) response Equal variances assumed -4.063 58 .000 DISCUSSION The results of this experiment support the experimental hypothesis. They signify that the construction of a question systematically affect the answer of the witness. Levene's test for Equality of Variances (as shown in appendix D) indicated that the likelihood of the population variances being equal in the case of the 'smashed' and the 'bumped' condition scores is 0.161. ...read more.