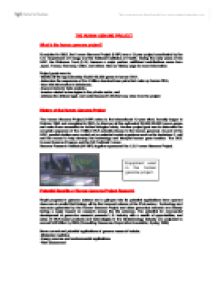 THE HUMAN GENOME PROJECT What is the human genome project? Completed in 2003, the Human Genome Project (HGP) was a 13-year project coordinated by the U.S. Department of Energy and the National Institutes of Health. During the early years of the HGP, the Welcome Trust (U.K.) became a major partner; additional contributions came from Japan, France, Germany, China, and others. See our history page for more information. Project goals were to: -identify all the approximately 20,000-25,000 genes in human DNA, -determine the sequences of the 3 billion chemical base pairs that make up human DNA, -store this information in databases, -improve tools for data analysis, -transfer related technologies to the private sector, and -address the ethical, legal, and social issues (ELSI) ...read more.

As part of the HGP, parallel studies were carried out on selected model organisms such as the bacterium E. coli and the mouse to help develop the technology and interpret human gene function. The DOE Human Genome Program and the NIH National Human Genome Research Institute (NHGRI) together sponsored the U.S. Human Genome Project. Potential Benefits of Human Genome Project Research Rapid progress in genome science and a glimpse into its potential applications have spurred observers to predict that biology will be the foremost science of the 21st century. Technology and resources generated by the Human Genome Project and other genomics research are already having a major impact on research across the life sciences. The potential for commercial development of genomics research presents U.S. ...read more.

This is the first time we've decided in so organized a way to alter the nature of life itself. Could employers and insurance companies obtain an individual's genetic information? Could government agencies or law enforcement authorities use genome research to invade privacy and predict behavior? Could prospective spouses demand DNA screenings to reject unsuitable mates? And there is a darker side to this radical project, even though few people in our society are considering it much. We have set out on a project whose goal is to alter the nature of human existence, without the interest of a single national political leader or a single Congressional debate (this in a country in which the mere mention of sex on the Internet sends legislative bodies into hyperdrive). ...read more.