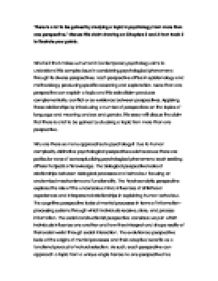 There is a lot to be gained by studying a topic in psychology from more than one perspective. Discuss this claim drawing on Chapters 2 and 3 from Book 2 to illustrate your points.

'There is a lot to be gained by studying a topic in psychology from more than one perspective.' Discuss this claim drawing on Chapters 2 and 3 from Book 2 to illustrate your points. What is it that makes us human? Contemporary psychology aims to understand this complex issue in considering psychological phenomena through its diverse perspectives. Each perspective differs in epistemology and methodology producing specific reasoning and explanation. More than one perspective can explain a topic and this eclecticism produces complementarity, conflict or co-existence between perspectives. Applying these relationships by introducing a number of perspectives on the topics of language and meaning and s*x and gender, this essay will discuss the claim that there is a lot to be gained by studying a topic from more than one perspective. Why are there so many approaches to psychology? Due to human complexity, distinctive psychological perspectives exist because there are particular ways of conceptualizing psychological phenomena each seeking different objects of knowledge. The biological perspective looks at relationships between biological processes and behaviour focusing on anatomical mechanisms and functionality. The Psychoanalytic perspective explores the role of the unconscious mind, influences of childhood experiences and interpersonal relationships in explaining human behaviour. ...read more.

As a result, whether different perspectives can combined into one complementary theory on a topic is debateable and this questions the benefits of multi-perspective study. In conclusion, looking at any one topic produces different answers depending on who is asked and which aspect of psychology is considered. Each perspective has two functions; to provide static, in depth bodies of knowledge and to engage in dynamic dialectic processes. Regarding knowledge, human psychological complexity requires each perspectives specialism thus psychology is characterised by diversity and this set of conceptual and methodological tools is indispensable in a common desire to explain the workings of the mind. In terms of dialogue, there are more ways to divide perspectives, theories and methodologies than ways to integrate them. Therefore, overarching explanations appear inferior to a comprehensive 'oscillating' truth constantly adding chains to the history of psychological understanding which is adaptive within the dynamism of historical, cultural and academic paradigms. Furthermore, considering the existential dichotomies of nature-nurture and objective-subjective dilemmas having no solution, this inescapable fact sees the ability of a multi-perspective approach as the most beneficial and balanced way to explore psychological topics. Therefore, there is a lot to be gained by studying a topic in psychology from more than one perspective. ...read more.