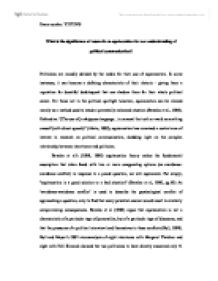 What is the significance of research on equivocation for our understanding of political communication?

What is the significance of research on equivocation for our understanding of political communication? Politicians are roundly derided by the media for their use of equivocation. In some instances, it can become a defining characteristic of their rhetoric - giving them a reputation for deceitful doublespeak that can shadow them for their whole political career. For those not in the political spotlight however, equivocation can be viewed merely as a method used to evade a potentially awkward situation (Bavelas et al., 1990). Defined as: "[The use of] ambiguous language...to conceal the truth or avoid committing oneself (with direct speech)" (Abate, 1999), equivocation has remained a central area of interest in research on political communication, shedding light on the complex relationship between interviewer and politician. Bavelas et al's (1988, 1990) equivocation theory makes the fundamental assumption that when faced with two or more unappealing options (an avoidance-avoidance conflict) in response to a posed question, we will equivocate. Put simply, "equivocation is a good solution to a bad situation" (Bavelas et al, 1990, pp.60) An 'avoidance-avoidance conflict' is used to describe the psychological conflict of approaching a question, only to find that every potential answer would result in similarly compromising consequences. ...read more.

As part of Bull & Mayer's (1993) microanalysis of Thatcher and Kinnock's rhetoric, a typology of non-replies composed of 11 super-ordinate categories, separated into 30 subcategories, was created. The super-ordinate categories showed the two politicians to: "ignore the question..., acknowledge the question without answering it..., question the question..., attack the question..., attack the interviewer..., decline to answer..., make a political point..., [give an] incomplete answer..., repeat the answer to a previous question..., state or imply that [they have] already answered the question...," and "apologise" (Bull & Mayer, 1993, pp. 13-22). The results showed that Thatcher and Kinnock displayed very similar patterns to their non-replies (both politicians used 'making political points' more than any other), yet they demonstrated differences in style. For example, Margaret Thatcher used 'attacking the interviewer' 13 per cent of the time, whereas Neil Kinnock did not use it at all. Overall, Thatcher's strategy was by far the more aggressive, and Kinnock's the more defensive. This research is particularly useful for showing effective ways of equivocating; Kinnock's frequent use of "you tell me" (Bull & Mayer, 1993, pp. 31) had a zero per cent effectiveness rate, as every time he avoided answering in this manner, the interviewer would simply ask him again, and answering negatively provoked similarly consistent repetitions. ...read more.

Nor does political communication consist only of communication from politicians. It is important to consider the influence of the receiver, as outlined in Bavelas et al's (1990) four dimensions of equivocation. They propose that avoidance-avoidance conflicts can affect the interviewer as well as the interviewee; facing similar pressures in terms of expected performance, high competition for jobs, and strict time limits, reporters can deviate from clarity within these four dimensions in similar ways. Through sender, they often refuse to reveal their source; through content, they readily use jargon and acronyms; through receiver, they ask inappropriate questions to which the receiver is not qualified to answer; and through context, they will digress from the original topic, and interrupt suddenly throughout the dialogue (Bavelas et al, 1990) Bavelas et al's (1988, 1990) research emphasises, and Bull's (1993, 1994, 1996, 2003) later studies confirm that it is the situational effects, not the politicians themselves that create the avoidance-avoidance conflicts: "The higher the proportion of avoidance-avoidance questions, the more likely politicians are to equivocate" (Bull, pp.152). It is possible to draw the conclusion that the questions typically posed to politicians can seem almost impossible to answer, and this is the reason for such frequent equivocation. It is unreasonable, perhaps, to expect politicians to answer questions that could end in political suicide, particularly given their fragile reputations, the substantial pressure from numerous sources and an electorate that expects so much. ...read more.