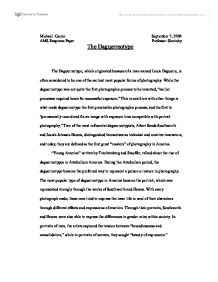 Daguerreotype. The most popular type of daguerreotype in America became the portrait, which was represented strongly through the works of Southworth and Hawes. With every photograph made, these men tried to express the inner life or soul of their characte

Michael Curcio September 7, 2008 AMS Response Paper Professor Skvirsky The Daguerreotype The Daguerreotype, which originated because of a man named Louis Daguerre, is often considered to be one of the earliest most popular forms of photography. While the daguerreotype was not quite the first photographic process to be invented, "earlier processes required hours for successful exposure." This in coalition with other things is what made daguerreotype the first practicable photographic process, and the first to "permanently record and fix an image with exposure time compatible with portrait photography." Two of the most influential daguerreotypists, Albert Sands Southworth and Josiah Johnson Hawes, distinguished themselves as technical and creative innovators, and today, they are defined as the first great "masters" of photography in America. "Young America" written by Trachtenberg and Stauffer, talked about the rise of daguerreotypes in Antebellum America. ...read more.

Her body is very graceful looking, which is a key component in Southworth and Hawes' portraits of women. Basically what this photograph says is that its photographer was looking to capture the girl in a very elegant and gentile pose as she gazes past the camera towards something in which appears to be "yearning" for. The photograph can also tell you a lot about the time in which it was produced because you can tell from the color and design of the portrait, that it was produced in the mid-1800's when the Daguerreotype was first becoming prevalent. The second photograph I chose, was a similar photograph, but different in that this time it was a multiple portrait of a woman in a shawl. According to the caption, "the artist, even in photography, must go beyond discovery and the knowledge of facts; he must create and invent truths and produce new developments of facts." ...read more.

I'm a firm believer in the saying that "expression is everything," and so when reading photographs I look at this to create my own unique interpretations. Photographs today, have a lot to do with recreating the past. They are visual representations of an instance that we wanted to remember. From looking at the colors of photographs and its surroundings, I can get an image of what was exactly going on at that moment. When looking at photos of my family or personal archive, there is no question that I will look at them differently. Right away, I will be able to notice differences in technology and the reasons for why we even take photos. What most of all I think I will take away with me about photography reading, is the way that I can look at an image and either draw comparisons or differences from ones of a previous period; especially after discovering Daguerreotype. Daguerreotype Portraits ...read more.