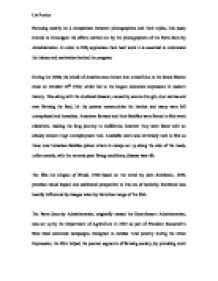 Documentary Photography. Focusing mainly on a comparison between photographers and their styles, this essay intends to investigate the efforts carried out by the photographers of the Farm Security Administration.

Focusing mainly on a comparison between photographers and their styles, this essay intends to investigate the efforts carried out by the photographers of the Farm Security Administration. In order to fully appreciate their hard work it is essential to understand the history and motivation behind the program. During the 1930s the whole of America was thrown into turmoil due to the Stock Market crash on October 29th 1929, which led to the largest economic depression in modern history. This along with the dustbowl disaster, caused by severe drought, dust storms and over farming the land, hit the poorest communities the hardest and many were left unemployed and homeless. American farmers and their families were forced to find work elsewhere, making the long journey to California; however they were faced with an already existent high unemployment rate. Available work was extremely hard to find so these now homeless families joined others in camps set up along the side of the roads, unfortunately, with the extreme poor living conditions, disease was rife. The film the Grapes of Wrath, 1940 based on the novel by John Steinbeck, 1939, provides visual impact and additional perspective to this era of hardship. Steinbeck was heavily influenced by images taken by Dorothea Lange of the FSA. The Farm Security Administration, originally named the Resettlement Administration, was set up by the Department of Agriculture in 1935 as part of President Roosevelt's New Deal economic campaigns. ...read more.

I do not remember how I explained my presence or my camera to her, but I do remember she asked no questions. I made five exposures, working closer and closer from the same direction. I did not ask her name or her history. She told me her age, that she was thirty-two. She said that they had been living on frozen vegetables from the surrounding fields, and birds that the children killed. She had just sold the tyres from her car to buy food. There she sat in that lean-to tent with her children huddled around her, and seemed to know that my pictures might help her, and so she helped me. There was a sort of equality about it".6 The family remained anonymous for some years but according to the mother's son, Lange got some of the details of this story wrong, nevertheless the impact of the picture greatly helped towards the FSA's purpose. Lange's photographs tended to tell a story, often sending a powerful social message and the idea that photographs could influence people to help the oppressed members of society was a theme in almost all of Lange's work. Following America's involvement in World War II, the Farm Security Administration's activities were greatly reduced. There was no longer a need for the programme and congress replaced it with the Farmers Home Administration, which helped in financing farms for tenants. ...read more.

Lange's approach tends to capture her subjects looking away into the distance, creating similar responses to Evans' work but from a different point of view. She would engage with them but would start to photograph once they had relaxed with her presence. "She would walk through the field and talk to people, asking simple questions - 'what are you picking? How long have you been here? I'd like to photograph you... they would pose a little, but she would sort of ignore it and walk around until they forgot us and were back at work then she would begin to take her pictures".11 Neither photographer is better than the other, they are both brilliant in their own way, one thing that is for sure is that "the impact of the Great Depression on rural communities has been perceived by latter generations on the basis of key images"12 such as Migrant Mother and Floyd Burroughs. 1 A World History of Photography, page 366 2 http://en.wikipedia.org/wiki/Farm_Security_Administration 3 A World history of Photography, page 341 4 Aperture, Dorothea Lange, page 5 5 Aperture, Dorothea Lange, page 9 6 http://en.wikipedia.org/wiki/Dorothea_Lange 7 Illuminations, page 154 8 A World History of Photography, page 366 9 http://lcweb2.loc.gov/ammem/fsahtml/fachap04.html 10 http://xroads.virginia.edu/~UG99/brady/doc.html 11 http://lcweb2.loc.gove/ammem/fsahtml/fachap03.html 12 A World History of Photography, page 369 ?? ?? ?? ?? Liz Purdue ...read more.