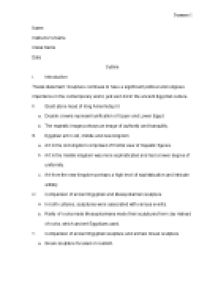 Egyptian Art. Sculpture continues to have a significant political and religious importance in the contemporary world, just as it did in the ancient Egyptian culture.

﻿Surname Name Instructor?s Name Class Name Date Outline 1. Introduction Thesis statement: Sculpture continues to have a significant political and religious importance in the contemporary world, just as it did in the ancient Egyptian culture. 1. Giant stone head of King Amenhotep III 1. Double crowns represent unification of Upper and Lower Egypt. 2. The majestic image portrays an image of authority and tranquility. 1. Egyptian art in old, middle and new kingdom 1. Art in the old kingdom comprised of frontal view of majestic figures. 2. Art in the middle kingdom was more sophisticated and had a lower degree of uniformity. 3. Art from the new kingdom portrays a high level of sophistication and intricate artistry. 1. Comparison of ancient Egyptian and Mesopotamian sculpture 1. In both cultures, sculptures were associated with various events. 2. Rarity of rocks made Mesopotamians made their sculptures from clay instead of rocks, which ancient Egyptians used. ...read more.