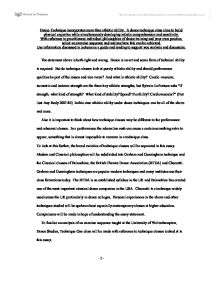 With reference to practitioners individual philosophies of dance training and your own practice, select an exercise sequence and analyse how this can be achieved.

Dance Technique incorporates more than athletic ability. A dance technique class aims to build physical expertise while simultaneously developing artistic comprehension and sensitivity. With reference to practitioners individual philosophies of dance training and your own practice, select an exercise sequence and analyse how this can be achieved. Use information discussed in lectures as a guide and reading to support you analysis and discussion. The statement above is both right and wrong. Dance is an art and some form of technical ability is required. But do technique classes look at purely athletic ability and should performance qualities be part of the lesson and vice versa? And what is athletic ability? Cardio-vascular, isometric and isotonic strength are the three key athletic strengths, but Sylvain LaFortune asks "if strength, what kind of strength? What kind of stability? Speed? Flexibility? Cardiovascular?" (Not Just Any Body 2001:84) In this case athletic ability under dance techniques can be all of the above and more. Also it is important to think about how technique classes may be different to the performance and rehearsal classes. In a performance the adrenaline rush can cause a certain something extra to appear, something that is almost impossible to recreate in a technique class. To look at this further, the broad varieties of technique classes will be separated in this essay. Modern and Classical philosophies will be subdivided into Graham and Cunningham technique and the Classical classes of Balanchine, the British Theatre Dance Association (BTDA) ...read more.

This was mainly in arabesque and develop� exercises, where there is a necessity to lift the leg that little bit higher. From this it is possible to say that Checcetti technique does incorporate a lot more than just athletic ability. The Modern technique of Martha Graham is "to train the body as to make it possible any demand made upon it by that inner which has the vision of what has to be said" (Graham in Cohen 1974: pg139). She describes the training of a dancer as "two fold". Both the physicality and mentality have to be developed to make a mature dancer, over an approximate ten-year period. First comes the study and practise of the craft which is the school where you are working in order to strengthen the muscular structure of the body. The body is shaped, disciplined, honoured and in time, trusted. The movement becomes clean, precise, eloquent, truthful. Graham in Carter 1999:66 This athletic strength is important in order to allow the "inner movement" to flow through. Graham believes that dance is not created; it is already inside the dancer, often through "blood memories". In I am a dancer (Carter 1998: pg 66) Graham describes one of her male dancers as not being able to be still, "he's got the essence of a man's inner life that prods him to dance". The second part of becoming a dancer looks at the mental development and from the need to dance. ...read more.

Another skill is embodying the movement so that it is performed from the inside out. Also there are the technical elements of turnout, tendus, chass�s, quick devlop�s and extension of the foot, plus balance and overall control in the abdominal muscles. Dennie Wilson, Dance Studies lecturer at the University, has explained that, unlike Balanchine's beliefs, the movement should be enjoyed. The twisting in the hips, the extension in the legs, the movement out of the dancers personal kinesphere in the rond de jambe section, the speed in the double turn at the end. By repeating it on the other side it becomes more embodied and the skill of being able to repeat things on the opposite side is practised. This is a good exercise to show how dance technique incorporates more than athletic ability. From all of the above information it is possible to conclude that dance technique classes do incorporate more than athletic ability, it is just in varying degrees. Although there are many other techniques and teachers, it is quite possible to say that performance and artistic values are taught in some way in all classes. The idea of a class is to develop a technique of some form, which can then be incorporated into choreography, which is then performed as an art. The emphasis in a class may not be on the beauty of the body, the inner feelings or the sparkle in the eyes but without artistic sensitivity and apresiation the art of dance cannot be enjoyed. ...read more.