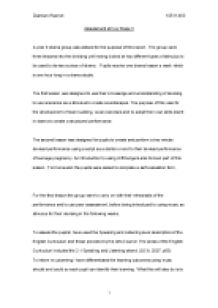 Assessing pupils in Key Stage 3. A year 9 drama group was utilised for the purpose of this report

﻿Damian Warren 10511463 Assessment at Key Stage 3 A year 9 drama group was utilised for the purpose of this report. The group were three lessons into the devising unit having looked at two different types of stimulus to be used to devise a piece of drama. Pupils receive one drama lesson a week which is one hour long in a drama studio. The first lesson was designed to use their knowledge and understanding of devising to use scenarios as a stimulus to create soundscapes. The purpose of this was for the development of team building, vocal exercises and to adopt their own skills learnt in drama to create a structured performance. The second lesson was designed for pupils to create and perform a two minute devised performance using a script as a starter or end to their devised performance of teenage pregnancy. An introduction to using cliff-hangers also formed part of this lesson. For homework the pupils were asked to complete a self evaluation form. For the final lesson the group were to carry on with their rehearsals of the performance and to use peer assessment, before being introduced to using music as stimulus for their devising in the following weeks. To assess the pupils I have used the Speaking and Listening level descriptors of the English Curriculum and those provided by the Arts Council. The areas of the English Curriculum included the 2.1 Speaking and Listening strand. (QCA, 2007, p63) ...read more.

In lesson one pupil 2 showed her knowledge and understanding of soundscapes. Pupil 2 made the suggestion of who would create what particular sound meeting the criteria of level 4. This demonstrated, ??pupils talk and listen in confidence in an increasing range of contexts. Their talk is adapted to the purpose, developing ideas thoughtfully?.? (QCA, 2007, p76) and relating this to the Arts Council England (2003, p36), ??Working confidently in groups using a drama techniques to explore situations and devise drama for different purposes.? Pupil 2 was also able to ??establish a character with control over movement and voice.? Other ways in which pupil 2 met the criteria of level 4 included, ??Experiment with their voice, to create or present different characters in performance. (Arts Council England, 2003, p36) To secure this, during the reflection process, through discussion pupil 2 ??commented on how intended effects have been achieved....? (QCA, 2007, p76) by suggesting she had ?chose the sounds of waves and seagulls to create the theme of peace and harmony?. During the second lesson pupil 2 made connection with the use of a ?cliff-hanger? relating to the intended learning of the lesson (see appendix 3) She also made connection with ??themes or issues in the drama and the way they were presented?? (QCA, 2007, p76) by commenting on how they interpreted the script by changing the plot to the ?son finding out the baby wasn?t his?. Evidence of this can be found in the evaluation homework pupil 2 had completed before carrying on with their rehearsal in lesson three. ...read more.

However three lessons provide only a snapshot of performance in Drama. It is also apparent specifically with pupil 3 that their learning does not progress each week, ??learning does not proceed in a simple, straight, liner fashion. Pupils will often make progress in one aspect of a subject while seeming to regress in another.? (Fleming, 2003, p125) It is therefore important to use peer and self assessment to ensure the pupils are making progress. I have found that the Arts Council and National Curriculum to be quiet prescriptive, for example an area of assessment might be to ??demonstrate an awareness of some theatre traditions from different times and places, e.g. Kathakali dance drama, Greek or Tudor theatre.? (Arts Council England, 2003:p36). This could not be achieved as the unit does not provide the opportunity for the students to address this. However Fleming (2003, p124) writes, ?Such schemes are useful for departments to adapt for their own use but mechanistically. An understanding of some of the reasons why describing progression in drama is particularly challenging will be helpful in making sensible flexible use of the available frameworks.? Reference List Books Arts Council England. (2003) Drama in Schools, London: Chatland Sayer. Ellis, V. (2007) Learning and Teaching in Secondary Schools, 3rd Edition, Exeter: Learning Matter Fautley, M. & Savage, J. (2008) Assessment for Learning and Teaching in Secondary Schools, Exeter: Learning Matters Fleming, M. (2003) Starting Drama Teaching 2nd Edition, London: David Fulton Publishers Ltd Kempe, A. & Ashwell, M. (2000) Progression in Secondary Drama, Oxford: Heinemann Websites QCA. (2007). English Programme of study for key stage 3 and attainment targets. Available: http://curriculum.qcda.gov.uk/key-stages-3-and-4/subjects/key-stage-3/english/Level-descriptions/index.aspx. Last accessed 01 April 2011. ...read more.