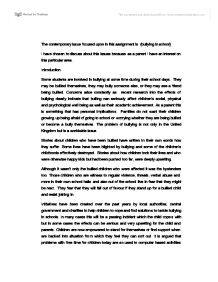 The effect of bullying on children at school

The contemporary issue focused upon in this assignment is (bullying in school) I have chosen to discuss about this issues because as a parent I have an interest on this particular area. Introduction Some students are involved in bullying at some time during their school days. They may be bullied themselves, they may bully someone else, or they may see a friend being bullied. Concerns arise constantly as recent research into the effects of bullying clearly indicate that bulling can seriously affect children's social, physical and psychological well being as well as their academic achievement. As a parent this is something that has personal implications. Families do not want their children growing up being afraid of going to school or worrying whether they are being bullied or become a bully themselves. The problem of bullying is not only in the United Kingdom but is a worldwide issue. Stories about children who have been bullied have written in their own words how they suffer. Some lives have been blighted by bullying and some of the children's childhoods effectively destroyed. Stories about how children took their lives and who were otherwise happy kids but had been pushed too far, were deeply upsetting. Although it wasn't only the bullied children who were affected it was the bystanders too. Those children who are witness to regular violence, threats, verbal abuse and more in their own school halls and also out of the school live in fear that they might be next. They fear that they will fall out of favour if they stand up for a bullied child and resist joining in. Initiatives have been created over the past years by local authorities, central government and charities to help children to cope and find solutions to tackle bullying in schools. In many cases this will be a passing incident which the child copes with but in some cases the effects can be serious and very upsetting for the child and parents. ...read more.

It would follow that bullying can be reduced by creating a more stimulating and interesting environment for children outside the classrooms as well as within. It has been observed that playgroup have change little, or not at all, over the last fifty years despite the vast technological change that have occurred in society; sometimes these have led to improvements in classroom but rarely outside. ( Rigby K 1996 p178) The anti bullying Alliance was establish in July 2002 by NSPCC and NCB and jointly 68 organisations into one association with the aim of reducing safe atmosphere in which children be able to live, grow and learn. Anti bullying week is all about raising alertness of serious issue of bullying. Student should be encouraged to report incident of bullying that children who are bullied receive protection as well as support. In the classroom teachers may use stories or discuss to increase awareness of bullying and bully courts can be set up for addressing bullying issues. It is vital that all children and young people turn into aware of what is bullying, and how their action affects the lives of other. Encouraged the development of social and moral alertness is the responsibility of bath home and school. What to do if you being bullied Hoping that bullying somehow go away will not work. The situation will almost certainly get worse if you stay quiet, because the bully realize that he or she can get away with it .if you being bullied you want ti to stop, you most tell to a staff member that you get on well. Young children who have been bullied need the help of their families and school. No one can be capable of deal with being bullied on their own. Effect of bullying Bullying can seriously frightening and makes them miserable. They often blame themselves a persistently bullied child may lose self confident. ...read more.

The school needs to establish a whole-school approach to bullying by establishing an awareness of the bullying problem. The school needs to evaluate how friendly it is toward bullying. Awareness of bullying both within and outside of the school can help reduce the act. Also, increased school safety features, such as video monitoring, can provide more protection to students. Students should be encouraged to report incidents of bullying by promising the students anonymity. The school should develop a student watch program by training student volunteers to patrol and report instances of bullying. In the classroom teachers may use stories and drama to increase awareness of bullying and bully courts can be set up for addressing bullying issues. The school should provide training for students in problem-solving approaches, which include conflict resolution training, conflict management and quality circles. All of these can be positive ways of addressing inappropriate behavior. These activities make the school safer and let students know that bullying is a violation of children's rights. What can PARENTS do to help? As a parent, be aware of whether your school has a bullying policy and whether the school staff take a united stand against bullying. If there is no bullying policy, and you suspect that your child is being victimized by peers, take an active role in setting up a policy for bullying in your school system and at the particular school your child attends. Try your best to work in harmony with principals, teachers and other school staff and not in opposition to them. Their perspectives may be different as their roles towards your child are different from yours: But in the end, you are waging a battle on which you are all on the same side. Listening to what principles, teachers and other school staff have to say based on their experience is as important as making your voice heard. For Olweus, D. (1993). Bullying at school: What we know and what we can do. Oxford: Blackwell Publishes Rigby, K. (1996) Bullying in Schools and what we can do about it ?? ?? ?? ?? ...read more.