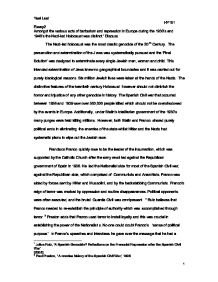 Amongst the various acts of barbarism and repression in Europe during the 1930s and 1940s the n**i-led Holocaust was distinct. Discuss

Amongst the various acts of barbarism and repression in Europe during the 1930's and 1940's the n**i-led Holocaust was distinct.' Discuss The n**i-led holocaust was the most drastic genocide of the 20th Century. The persecution and extermination of the Jews was systematically pursued and the 'Final Solution' was designed to exterminate every single Jewish man, woman and child. This intended extermination of Jews knew no geographical boundaries and it was carried out for purely ideological reasons. Six million Jewish lives were taken at the hands of the Nazis. The distinctive features of the twentieth century Holocaust however should not diminish the horror and injustice of any other genocide in history. The Spanish Civil war that occurred between 1936 and 1939 saw over 500,000 people killed which should not be overshadowed by the events in Europe. Additionally, under Stalin's totalitarian government of the 1930's many purges were held killing millions. However, both Stalin and Franco shared purely political ends in eliminating the enemies of the state whilst Hitler and the Nazis had systematic plans to wipe out the Jewish race. Francisco Franco quickly rose to be the leader of the insurrection, which was supported by the Catholic Church after the army revolted against the Republican government of Spain in 1936. He led the Nationalist side for most of the Spanish Civil war, against the Republican side, which comprised of Communists and Anarchists. ...read more.

At the 1934 Party Congress, Kirov switched sides and began criticising Stalin and his harsh policies. As such, Stalin decided to take action against Kirov who was emerging as a potential rival for leadership of the Party. On 1st December 1934, Stalin had Kirov assassinated. On the same day, Stalin passed a law that ordered anyone accused of terrorism and plots against the government was to be arrested and executed immediately after conviction. This law gave Stalin the chance to carry out the Great Purges properly and easily without any resistance. This is evidence of Stalin removing any political enemies that would hamper his total power. 9Davis believes that Stalin's paranoia played a vital role in the terror that took place in the state. Stalin had become very suspicious that there would be an attempt to overthrow him and he therefore began to move his most trusted followers to key positions within the Party and the country. 10Stalin's paranoia also saw the introduction of the Gulag camp, these were a string of harsh labour camps set up throughout the country at key points to get raw material and help the industrialisation process, even making prisoners work in the harsh winters of Siberia. Stalin used the Gulag camps to maintain the Soviet state by keeping its populace under an everlasting state of terror. ...read more.

Certainly the terrifying details of Kristallnacht were widely publicized in the international press by correspondents who, in many cases, were eyewitnesses of the events they reported. Yet it took the invasion of Poland in September 1939 (ten months later) before the Allies, who at that point were required to intervene by their own treaty obligations, began military intervention in the affairs of Europe. It is difficult to avoid the impression that the world's apathy at the unfolding horror in Europe was not in part a result of underlying subtle anti-Semitism. The nations of the world had numerous opportunities as the events leading up to and during the Second World War unfolded to take measures that might have confined the damage done to the Jewish population of Europe. None of these steps was taken until far too late. In conclusion, the holocaust was a distinct and unique event in history as it was the only time where a state set out to annihilate every single man, women and child from a specific race, the Jewish race. Jewish birth was sufficient to warrant the punishment of death and policies were implemented to let the Nazis carry this task through. The events surrounding the holocaust took place for political reasons only yet innocent murder also occurred. The holocaust was genocide of innocent peoples deemed inferior or unproductive and the Nazis did everything in their power to destroy every last Jew. ...read more.