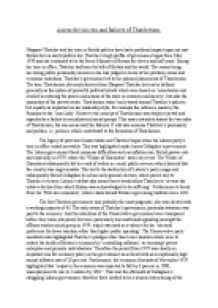 Assess the success and failures of Thatcherism.

﻿Assess the success and failures of Thatcherism. Margaret Thatcher and her time in British politics have had a profound impact upon not just Britain but on world politics too. Thatcher?s high profile of governance began from May 1979 and she continued to be the Prime Minister of Britain for eleven and half years. During her time in office, Thatcher had been the talk of Britain and the world. The reason being her strong public personality moreover she was judged in terms of her political, social and economic ambitions. Thatcher?s governance led to the political phenomena of Thatcherism. The term Thatcherism obviously derives from Margaret Thatcher but can be defined generally as the system of powerful political beliefs which were based on ?monetarism and a belief in reducing the power and actions of the state in economy and society?, but also the promotion of the private sector. Thatcherism wasn?t only based around Thatcher?s policies but equally as important on her leadership style, for example the reference made by the Russians to the ?Iron Lady?. However the concept of Thatcherism was deeply rejected and regarded as a failure by socialists and social groups. This essay intends to assess the two sides of Thatcherism, the success as well the failures. It will also examine Thatcher?s personality and politics, i.e. policies, which contributed to the formation of Thatcherism. The legacy of post-war Conservatism and Thatcher began when the Labour party?s time in office ended inevitably. ...read more.

The war which lasted for 74 days for the control over the Falkland Islands was a result from the long running dispute between Argentina and Britain. This was over the sovereignty of the Falkland Islands. The invasion demonstrated Thatcher?s sheer toughness and strength. It could also be said that the liberation the Falklands was reckoned as a ?personal triumph? and was proved to be the ?defining moment of her premiership?. The Falklands war and a distrusted divided opposition helped Thatcher win the 1983 general election. And one of Thatcherism?s innovations during her second term was the attitude towards the trade unions. Thatcher was determined to weaken the stranglehold labour unions held over the industries and government in Britain which resulted in enacting the trade union reforms. The main aims of Conservatives were to reduce the ability of the trade unions to challenge the government and stand in the way of economic change and reforms, which broke the traditional relationship with them. This could be highlighted by the uprising of the militant miners in 1984. The miners union and strike was led by Arthur Scargill for a year, with the stated aim of ?roll back the years of Thatcherism?, as he needed a show of force with large numbers of pickets to stop coal being transported. And also Scargill needed to ensure that the strike held by ensuring that miners did not return to work. ...read more.

And more notably, Tony Blair?s New Labour was built upon Thatcher?s reforms such as the privatisation programme was left intact as Labour itself carried out mini privatisations such as air traffic control. Furthermore business and enterprise had been courted by New Labour, corporation tax cut and employee rights were strengthened rather than the ties with the Trade Unions. As this essay has provided arguments for the successes and the failures of Thatcherism and the Thatcher government, it without a doubt, highlights the unique political style and political substance that was present for over eleven years. It could be said that Thatcherism radically departed from the norms and traditions of British politics, especially after the post-war consensus. The policy in regards to the economy from the period of 1979 demonstrated a significant shift from accepting previous government?s Keynesianism orthodoxy to Thatcher?s belief in monetarism. The contrast between previous Labour governments and Thatcherism could not be sharper. The Labour party?s incentive was to nationalize more whereas it was the Conservatives that privatized industries with the individualistic approach enacted effectively under Thatcher. However the arrival of Thatcherism marked something which could be claimed as revolutionary, as Blair strategy was based upon third way politics. It could be said that Thatcherism was a success as the school of thought is still applied to today?s politics however times are once again changing in British politics, so the success of Thatcherism in the future is yet to be decided. ...read more.