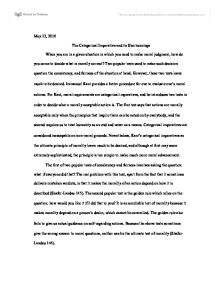 May 12, 2010 The Categorical Imperative and its Shortcomings When you are in a given situation in which you need to make moral judgment, how do you come to decide what is morally correct? Two popular tests used to make such decision question the consistency, and fairness of the situation at hand. However, these two tests leave much to be desired. Immanuel Kant provides a better procedure for one to evaluate one's moral actions. For Kant, moral requirements are categorical imperatives, and he introduces two tests in order to decide what a morally acceptable action is. The first test says that actions are morally acceptable only when the principles that inspire them can be acted on by everybody, and the second requires us to treat humanity as an end and never as a means. Categorical imperatives are considered inescapable on non-moral grounds. Nevertheless, Kant's categorical imperatives as the ultimate principle of morality leave much to be desired, and although at first may seem extremely sophisticated, the principle is too simple to make much more moral advancement. The first of two popular tests of consistency and fairness involves asking the question: what if everyone did that? The real problem with this test, apart from the fact that it sometimes delivers mistaken verdicts, is that it makes the morality of an action depend on how it is described (Shafer-Landau 145). The second popular test is the golden rule which relies on the question: how would you like it if I did that to you? ...read more.

The first is to act only according to that maxim by which you can at the same time will that it would become a universal law. If a maxim cannot hold the universal law it is wrong and irrational. Moral irrationality undermines our own autonomy and fails to allow us to be our own free autonomous agent. The second formulation is that every rational being exists as an end in itself, and not merely as a means to be used (Kant 79). This entails that each human being must be treated as a free and rational person and not as a means by using them without their consent as an instrument so that one's interests can prosper. Kant presents four examples to demonstrate the validity of the categorical imperative according to both formulations. The first observes a person who desires to commit suicide. According to Kant, destroying one's life cannot constitute as a maxim because it does not apply as a universal law of nature, and goes against the principles of preserving life. For this example, he claims that suicide is a case of treating oneself as a means instead of an end. The second example is of one who needs to borrow money and makes the promise that it will be repaid in a determined time even though he is aware he will not be able to repay it. Kant claims that universal promise breaking would be impossible as it would result that no one will believe promises anymore. ...read more.

As observed, Kant's categorical imperative can be easily manipulated so that it leads to results that seem morally right, all one has to do is trivially change one's maxim. The second formulation's shortcomings can be observed in example two. In accordance with the second formulation, human beings should not be treated as means since they have incomparable value (Kant 77). Not being able to repay debt is immoral since it uses another person to promote one's own prosperity. The same problem arises: how does one then choose between two people, since one cannot compare the value of a person in a situation in which one is given a choice between different people? Lastly, the notion of treating someone as an end is vague, therefore making the principle hard to apply. Without a more precise test of when we are respecting others and treating them as they deserve, the principle of humanity fails to give us the guidance we expect from an ultimate moral principle (Shafer-Landau 166). Both formulations of the categorical imperative offer the same position: people must treat each other as equal free rational autonomous people in their search for their interests. Although Kant's arguments for categorical imperatives provide us with a better test than those of fairness and consistency, and is based on duty and reason. Problems arise with the fact that it lacks emotions, and it is too inflexible. To reiterate, Kant's philosophy contains various inconsistencies. His method does not yield many specific answers to moral problems due to ambiguity as to which moral rules the categorical imperatives produce. ...read more.