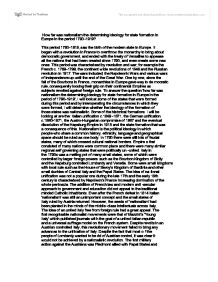 How far was nationalism the determining ideology for state formation in Europe in the period 1790-1919?

How far was nationalism the determining ideology for state formation in Europe in the period 1790-1919? This period 1790-1919, saw the birth of the modern state in Europe. It began with a revolution in France to overthrow the monarchy to bring about democratic government, and ended with the treaty of Versailles to appease all the nations that had been created since 1790, and even create some new ones. This period was characterised by revolution and war; for example the French c. 1789-1799, the continent wide revolutions of 1848 and the Russian revolution in 1917. The wars included; the Napoleonic Wars and various wars of independence up until the end of the Great War. One by one, since the fall of the Bourbons in France, monarchies in Europe gave way to democratic rule, consequently loosing their grip on their continental Empires as subjects revolted against foreign rule. To answer the question 'how far was nationalism the determining ideology for state formation in Europe in the period of 1790-1919', I will look at some of the states that were formed during this period and by interoperating the circumstances in which they were formed, I will determine whether the ideology of the formation of those states was nationalistic. Some of the historical formations I will be looking at are the: Italian unification c.1849-1871, the German unification c.1860-1871, the Austro-Hungarian compromise of 1867 and the eventual dissolution of the Hapsburg Empire in 1918 and the state formation that was a consequence of this. Nationalism is the political ideology in which people who share a common history, ethnicity, language and geographical space should be ruled as one body. ...read more.

By 1865 Prussia possessed 15,000 steam engines, Austria only 3400 (The Fontana history of Germany, Pg 250). The exclusion of Austria to the Zollverein Prussia integrating itself with smaller German states and at the same time marginalising Austria from the rest German Confederation. In 1862 Prussia appointed Otto Von Bismarck as Prime Minister, who would by a mixture of diplomacy and military strength would unify Germany. When the Danish king died in 1863 it left questions over the North German regions of Schleswig-Holstein which lead to the intervention of Austro-Prussian troops who secured the area in 1864 (243). These provinces were split amongst Prussia and Austria. Bismarck used various treaties to weaken Austria's position and after he proposed 'radical changes to the German Confederation' this provoked war in 1866. The Prussian won the war and various Northern German territories were annexed to Prussia and Austria signed a peace treaty in Prague that meant it couldn't interfere with German affairs. After the creation of North German Confederation a constitution was established by Bismarck which proclaimed universal male suffrage. Germany was not quite united as many Southern states remained independent. To complete unification it would take another vacant throne to catalyse the movement. In this case the empty Spanish throne brought up by which had been offered to Prince Leopold of Hohenzollern. This was a candidature to which France objected and subsequently was withdrawn. The French Empire wanted a written guarantee that no member of the Hohenzollern would adopt candidature of the Spanish throne. ...read more.

They were seeking expansion into the Balkan areas. They had fought military campaigns in 1912-13 against the Ottoman Empire for control over Moldova and Macedonia. However their main aim was to unite all the Slavic people under one Serbian crown, many of these people were located in the Austrian-Hungarian Empire. Various national youth group had tried and failed to secure an assassination of an Austro-Hungarian official in order to spark a National movement. Serbian officials organised the assassination of the heir to the Austrian throne, Archduke Franz Ferdinand by Serbian nationals in Sarajevo in 1914. The attempt was successful and a month later Austrian had declared war on Serbia and due a secret agreement between Serbian and Imperial Russia, they had declared war on Russia, shortly afterwards WWI began. The consequences of the WWI completely changed the map of Europe and created many new sovereign states. The Austrian Empire was destroyed leaving a new state of Austria, Hungary, Yugoslavia (a nation under which laid a multiethnic group of Slavs) and Czechoslovakia. The Russian Empire was abandoned during the communist revolution of 1917 making a new state of Soviet Russia, Finland, Latvia, Lithuania, Estonia and Poland. In conclusion I would agree that the main ideology in state formation in Europe between 1790 and 1919 was nationalism. After the French revolution which established a constitution and the rights of man in a republic. Many nations within absolute monarchies used these principles to form nations of their own by culminating all the people of their own culture, language, common history and immediate geography under the one nation one state policy. Break down of the great European Empires and the unification of Germany and Italy show testimony to this. ...read more.