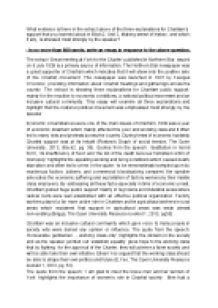 Open University. What evidence is there in the extract above of the three explanations for Chartisms support that you learned about in Block2, Unit 2,

﻿What evidence is there in the extract above of the three explanations for Chartism?s support that you learned about in Block2, Unit 2, Making sense of history, and which, if any, is stressed most strongly by the speaker? : In no more than 800 words, write an essay in response to the above question. The extract ?Great meeting at York for the Charter? published in Northern Star, issued on 6 July 1839 is a primary source of information. The Northern Star newspaper was a great supporter of Chartism which indicates that it will show only the positive side of the Chartist movement. The newspaper was launched in 1837 by Feargus O?Connor, providing information about Chartist meetings and gatherings across the country. The extract is showing three explanations for Chartism public support; mainly for the reaction to economic conditions, a national political movement and an inclusive cultural community. This essay will examine all three explanations and highlight that the national political movement was emphasised most strongly by the speaker. ...read more.

Chartism was an inclusive cultural community which gave voice to many people in society who were denied any opinion or influence. The quote from the speech: ?Honourable gentlemen?..working class only? highlights the division in the society and as the speaker pointed out ?establish equality? gives hope to the working class that by fighting for the approval of the Charter, they will achieve a fairer society and will be able take their own initiative. Eileen Yeo argued that the working class should be able to shape their own politics and future (E.Yeo, The Open University Resource booklet 1, 2013, pg. 52). The quote from the speech: ?I am glad to meet the brave men and fair women of York? highlights the importance of women?s role in Chartist society. Men had a greater role in the society but the women?s role was just as important. Although Chartism was an inclusive society, women were not included in the goals of the Charter to have a right to vote, but they were contributing in many ways such as signing petitions, taking part in demonstration and publishing manifestos (Thompson, The Open University Resource booklet 1, 2013, pg. ...read more.

The extract clearly states that people were demanding political reform which would benefit all classes, not just the rich and were not satisfied with economic hand-outs. The speaker suggests that if ?the People?s Charter becomes law of the land? it will bring ?political equality, social comfort and domestic happiness?. It is clear that the speaker addressed all three benefactors of Chartist support. From all the evidence gathered and analysed in this essay, it seems that the national political movement is most strongly stressed and a democratic reform is the foundation for the social and economic change. People supported Chartism for varies reasons; some searching for answers to economic problems, some sought a fairer society through cultural participation but most importantly they wanted political equality. The meeting itself took place in support of the Charter to become the ?law of the land?. The speaker emphasised that the introduction of the Charter ?will elevate to enjoyment of political equality, social comfort, and domestic happiness?. The speaker advocates that the people?s economic and social demands will only be achieved by a political reform which will bring ?a whole world with the golden era of universal peace, happiness and wealth?. Word count: 878 ...read more.