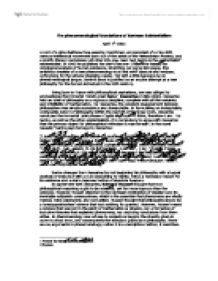 The phenomenological foundations of Sartrean Existentialism.

The phenomenological foundations of Sartrean Existentialism April 7th 2003 A runt of a pink-feathered boa-wearing Frenchman, an iconoclast of a mid-20th century intellectual movement born out of the ashes of the Nietzschean Phoenix, and a prolific literary connoisseur all rolled into one, Jean Paul Sartre is the existentialist' existentialist. In 1943 he published his chef-d'oeuvre- L'Etre et le Neant,1 an ontological analysis of human existence. Stretching out some 800 pages, this ambitious treatise of a new phenomenology is at first whiff obscure and verbose, unforgiving for the window shopping reader. Yet with a little background on phenomenological jargon, Sartre's book is justified as an erudite attempt at a new philosophy for the human individual in the 20th century. Being born in France with philosophical aspirations, one was obliged to acknowledge the immortal French great Rene` Descartes (1596-1650). Descartes held an ideal of philosophy as a rigorous discipline, complete with all the certainty and infallibility of mathematics. For Descartes, the constant disagreement between philosophers was simply scandalous and disreputable. In formulating an indisputable, unshakable datum of philosophy within the warmth of his bread oven, Descartes concluded the immortal Latin phrase: Cogito ergo sum --I think, therefore I am. For Sartre, as well as the other existentialists, it is compulsory to agree with Descartes that the primary object for philosophical reflection is man himself. In the novel Naus�e,2 Sartre pays homage to Descartes: "I jump up: it would be much better if I could only stop thinking. Thoughts are the dullest things... and they leave a funny taste in the mouth. Then there are words, inside the thoughts, unfinished words, a sketchy sentence, which constantly returns: 'I have to fi... I ex... Dead... M. de Roll is dead ... I am not ... I ex...' it goes, it goes... and there's no end to it. It's worse than the rest because I feel responsible and have complicity in it. ...read more.

In the act of reflecting I pass judgment on the consciousness reflected-on; I am ashamed of it, I am proud of it, I will it, I deny it, etc." I could be watching a soap opera, and it would occupy my entire consciousness. The self is missing unless I reflect upon my experience of the soap opera, then the self emerges, the 'I' is now within my consciousness. Hence, by its nature as awareness, consciousness is the "pre-reflectively cogito." No laws inhibit it, given that Sartre states it is "futile to invoke pretended laws of consciousness" while laws are "transcendent objects of knowledge; there can be a consciousness of law, not a law of consciousness." When one experiences a pleasure, he is doubly aware of the experience and indirectly aware of himself in pleasure. Claiming that there is no division between the object and the consciousness of the object, Sartre also infers that there is no logical difference between watching and the consciousness of watching: "Pleasure cannot exist 'before' consciousness of pleasure- not even in the form of potentiality or potency. A potential pleasure can exist only as consciousness (of) being potential. Potencies of consciousness exist only as consciousness of potencies." Pleasure does not vanish into its own self-consciousness, for it is a "concrete event, full and absolute." This avoids idealism, which installs consciousness as an independent existence, a substance that subsists itself. 'Being for consciousness,' foreshortened later in the second half of L'�tre as "being-for-itself," is a brute existence that has a principal characteristic Sartre calls 'activity.' It is dependent on matter, for without matter there would be no consciousness. In opposition, the transphenomenal being of phenomena, being-in-itself has a character of an "incomplete inactivity" for any relationship to itself, in Sartre's language, "opaque" and "coincides exactly with itself." it is self-contained, and that being is in itself. Sartre has made a metaphysical claim that he is a dualist, that there are two forms of beings, unlike the later Husserl. ...read more.

I could envision the possibility of not completing this essay, which is bringing about nothingness between me and the future possibility of a complete essay, and causing the concrete possibility of a negation. This leads to anguish. I can also envision causal chains to explain my behavior and recede to the comfort of habits in order to avoid the ramifications of Anguish. Yet "I cannot help constituting them as living possibility, that is as having the possibility of becoming my possibility." Instead of anguish, I conceive of my past as my true self. Sartre dismisses this attempt to sink into facticity, saying this is nothing but the object formed by reflecting on my past behavior, that "we are always ready to take refuge in a belief in determinism. If this freedom weighs upon us too heavily or if we need an excuse." All attempts to flee from anguish are fruitless, "for we are anguish." "I am what I wish to veil." The attempt of "expelling anguish from consciousness" and "of constituting it in an unconscious psychic phenomenon" is self-deception, or Bad faith. 1 French for Being and Nothingness 2 Nausea 3 The return to the things themselves, the bracketing out of the real, existence, the thing in themselves, excluded as unknowable. This claim is a rejection of Idealism. 4 Husserl's pure ego is his homage to Descartes and Kant. It is the assertion that the ego is the subject of consciousness, but Sartre treats consciousness in two aspects: negatively and positively. Negatively it is a denial of Husserl's doctrine of the ego, and positively it is a determination of Sartre's own egoless consciousness. 5 Being and Time 6 German for "thing in itself." 7 Noema is a perceptual content of a phenomenological description of a perceptual experience, the object that is intended. The noema of a hallucination is an intentional act, even if the hallucination lacks a corresponding entity in reality. Noema is correlated with noesis, which is what gives sense to the immanent object of consciousness - believing, remembering, valuing, etcetera - the act of intending. ?? ?? ?? ?? ...read more.