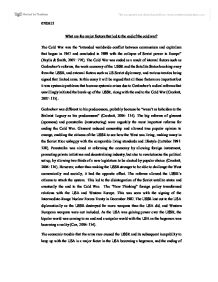 What are the major factors that led to the end of the cold war?

What are the major factors that led to the end of the cold war? The Cold War was the "extended worldwide conflict between communism and capitalism that begun in 1947 and concluded in 1989 with the collapse of Soviet power in Europe" (Baylis & Smith, 2007: 770). The Cold War was ended as a result of internal factors such as Gorbachev's reforms, the weak economy of the USSR and the Satellite States breaking away from the USSR, and external factors such as US-Soviet diplomacy, and various treaties being signed that limited arms. In this essay it will be argued that all these factors are important but it was systemic problems that became systemic crises due to Gorbachev's radical reforms that unwillingly initiated the break-up of the USSR, along with the end to the Cold War (Crockatt, 2007: 115). Gorbachev was different to his predecessors, probably because he "wasn't as beholden to the Stalinist Legacy as his predecessors" (Crockatt, 2006: 114). The big reforms of glasnost (openness) and perestroika (restructuring) were arguably the most important reforms for ending the Cold War. ...read more.

The problem was that "a disproportionate share of the wealth went to non-productive military budgets, or disappeared in the floundering economies..." (LaFeber, 1991: 293). Competing with the 'supply side' Reaganomics which saw the USA spending up to 5% of its GDP on weapons, meant the USSR had to spend 50% of its GDP on weapon to keep up in the arms race (LaFeber, 1991: 295). This was not possible and the economy collapsed. The economy was growing at only 0.8% in 1979 (LaFeber, 1991: 293). A major problem was the lack of technology in areas such as farming that led to the USSR, with the largest tillable land, being unable to feed its people. It could be argued when comparing the USSR to a human living standard index it would show it as being a third world country. The breakaway of some satellite states form the USSR was a substantial factor in ending the Cold War. It led to the disintegration of the Warsaw Pact, and the collapse of the USSR. The breakup came from various satellite sates toppling communist parties in free elections during 1989 such as Hungary in March and Poland in June. ...read more.

The suddenness of the collapse of communism defied the predictions of experts. Neo-realism failed to predict the end of the Cold War because it focused on 'high economies' and ignored economic and social reasons which were key in why the Cold War ended. This led to Constructivism becoming a main school of thought in International Relations (Brooks & Wohlforth, 2000-2001: 5.53) In judgement, it was a mixture of American pressure, Soviet economic ruin, the breakup of the satellite states and the reforms of Mikhail Gorbachev that led to the end of the Cold War. However, Gorbachev's radical reforms were the most crucial as they all made it easier to attack the Soviet machine and bring it down by those who resented it, such as Lech Walsea in Poland. The pressure put on the USSR's economy by the USA with its massive military build-up, and its subsequent collapse made it impossible for the USSR to keep up with the USA and along with Gorbachev's signing of the various arms treaties, secured the US as a hegemon, ending the bipolar world of the Cold War, along with the Cold War itself. ...read more.