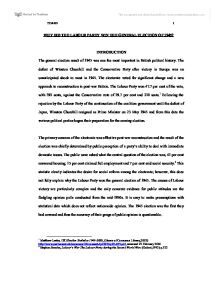 Why did the Labour Party win the General Election of 1945?

WHY DID THE LABOUR PARTY WIN THE GENERAL ELECTION OF 1945? INTRODUCTION The general election result of 1945 was one the most important in British political history. The defeat of Winston Churchill and the Conservative Party after victory in Europe was an unanticipated shock to most in 1945. The electorate voted for significant change and a new approach to reconstruction in post-war Britain. The Labour Party won 47.7 per cent of the vote, with 393 seats, against the Conservative vote of 39.7 per cent and 210 seats.1 Following the rejection by the Labour Party of the continuation of the coalition government until the defeat of Japan, Winston Churchill resigned as Prime Minister on 23 May 1945 and from this date the various political parties began their preparation for the coming election. The primary concern of the electorate was effective post-war reconstruction and the result of the election was chiefly determined by public perception of a party's ability to deal with immediate domestic issues. The public were asked what the central question of the election was, 41 per cent answered housing, 15 per cent claimed full employment and 7 per cent said social security.2 This statistic clearly indicates the desire for social reform among the electorate; however, this does not fully explain why the Labour Party won the general election of 1945. The causes of Labour victory are particularly complex and the only concrete evidence for public attitudes are the fledgling opinion polls conducted from the mid-1930s. It is easy to make presumptions with statistical data which does not reflect nationwide opinion. The 1945 election was the first they had covered and thus the accuracy of their gauge of public opinion is questionable. This essay is an attempt to analyse and evaluate all of the issues regarded as responsible for the outcome of the election. The election campaigns of each party were central in shaping public opinion and must be scrutinised. ...read more.

The Conservative manifesto, election broadcasts, propaganda and speeches did not solve a problem with roots which lay well before the outbreak of the Second World War. THE SHIFT TO THE LEFT IN WARTIME BRITAIN Evacuation during the war was an enormous social upheaval. By 1945 four million people had been evacuated from urban areas to the countryside.33 It also caused an unprecedented blending of different social classes. The urban poor were evacuated to the affluent countryside, and the vast chasm in social inequality became apparent. Socialists like Margaret Cole saw evacuation as important, The countryside and the comfortable classes suddenly became painfully aware, in their own persons, of the deep and shameful poverty which exists to-day in the rich cities of England.34 Richard Titmuss agreed with Cole's thought, he argued that evacuation was primarily responsible for the introduction of welfare reform like the 1944 Education Act.35 It is undeniable that there was widespread concern of the 'condition of England' as a direct result of evacuation. Even Neville Chamberlain admitted his surprise at conditions, 'I never knew that such conditions existed, and I feel ashamed of having been so ignorant'.36 The mixing of town and countryside was a shocking revelation for the rural middle class. They were astonished at the ill-mannered and unhealthy children that were brought to them. The astonishment at this revelation however should be scrutinised in terms of what it meant for the shift in public opinion. There is no real evidence to suggest that evacuation was a precursor to the growth of left-wing sentiment. The discovery of such poor living conditions of the urban poor by the rural middle class merely reinforced conclusions that had been drawn well before the war. In their view, ignorance did not lie with the middle class, but in fact with the urban poor. Arthur Marwick for example, takes a more realistic approach to evacuation. He argues that whilst there was increased unease about urban living standards, evacuation did not tear down middle class prejudices of ...read more.

As a result of this problem, historians are forced to assume what caused the 12 per cent swing towards the Labour Party. In short, the general election result was a combination of poor Conservative campaigning, a distrust of the Conservative Party and a general rise in left-wing sentiment during the Second World War. The idea of a socialist revolution or a radical swing towards the Labour Party is misguided. Socialist ideas became more popular and more acceptable during the Second World War, especially with the middle class which was where Labour gained considerably, but this did not ultimately mean that the Labour Party was guaranteed victory. Both parties went to the polls promising reconstruction and social reform in 1945. It was not Labour's promise of a 'Socialist Commonwealth of Great Britain' which caused the swing vote in 1945.66 The Labour Party's success was less to do with specific left-wing policies than many historians assert. Housing and social security, for example were very important to the electorate, and whilst they were aware of the Conservative Party's history of failure in the field, they had no real proof that a Labour government would do any better. It is more accurate to describe the election result as an example of general disenchantment with the Conservative Party. Winston Churchill, for all his imperfections, was immensely popular, and it was not he, but the Conservative Party itself that lost the election in 1945. They were unable to tame the distrust which had grown from the inter-war years and into wartime Britain. It was from 1940-1945 that the Conservative Party was to justify scepticisms which had existed, albeit on a smaller scale, before the war. The Conservatives were tactless in dealing with the Beveridge Report, and this, as indicated in the opinion polls from 1943 onwards, was the trigger cause of their downfall. Their election campaign was particularly insensitive to the build up of disenchantment among the electorate, and together with the increased credibility of the Labour Party and its policies caused a 12 per cent swing which caused Winston Churchill and the Conservative Party to fall from grace. ...read more.