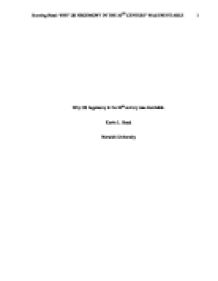 Why US hegemony in the 20th century was inevitable.

Why US hegemony in the 20th century was inevitable. Kevin L. Boyd Norwich University Abstract At the beginning of the 20th century nobody thought or could even conceive of the changes within the world system of politics that would take place, to include a hegemon outside of Europe. While the US was certainly a rising economic and financial power, its military was miniscule, and its foreign policy was clearly isolationist. Geographically Europe is connected to Asia and Africa, and since the vast majority of the great powers up until the year 1900 had come from Europe or somewhere close by, such at Ottoman Turkey, there was no concept that the US would rise to such a hegemonic state. In this paper I will examine the reasons that the US was able to rise to, while the remainder of the modern world failed to retain hegemonic status. I will also attempt to predict the near future of world affairs and who will be the hegemonic power or powers. Keywords: hegemon, isolationist. Why US hegemony in the 20th century was inevitable. Introduction As the year 1899 passed into history and the 20th century dawned; the world was a very different place that what we know it as today. Europe was just coming out of a period now known as the 'Long Depression,' which was a worldwide economic crisis that began in Vienna Austria in 1873 and didn't end until 1896. The British Empire was the dominate hegemonic power in 1900 and had been so for centuries, and while other nations and empires sought to gain power, status, and glory there was no concept that Britain would be surpassed by the United States of America. The United States of America was viewed as a rising financial power by ideologists in Europe, but not much more than that despite its victory over Spain in the recent Spanish-American War. ...read more.

It was these eight nations that were the great powers of the day, with Britain, France, Russia and Japan being the most powerful nations at this time. The Boxer rebellion led to the great powers (Read Britain and France chiefly) giving up on their desires to colonize China and deciding that the best way to control China was through the Chinese Dynasty. Russia did however invade and seize Manchuria which ultimately led to the Russo-Japanese War, and irritated both Britain and the US as they hoped to gain or maintain commerce through a united China. In fact on January 2nd 1900 US Secretary of State John Hay had announced the US's 'Open Door Policy' which was to promote American trade with China. Elsewhere in the world events that would lead to the future US hegemon would be setting the stage as well, such as Russia's tightened control over Finland that would eventually lead the Winter War of 1939, the US sending naval vessels as a show of force to protect American interests in a conflict between Nicaragua and Costa Rica, and the decline of the Ottoman Empire. WWI and the Alliances While the Boxer rebellion saw an Eight-Nation Alliance spring up to fight an uprising, which is actually what we would call a coalition today, the earlier mentioned Triple Alliance formed between Germany, Austria-Hungary, and Italy was formed in 1882 as a mutual defensive pact. The other European nations began to see a rising Germany as a potential threat, and Britain and Russia agreed to lay aside their differences and signed the Anglo-Russian Entente in 1907 which solidified their imperial boundaries in Persia, Afghanistan, and Tibet (Conybeare, 1990). Britain and Russia, with the addition of France,. soon signed an Alliance named the Triple Entente (French for three party agreement) that guaranteed their mutual defense in the event one of them was aggressed upon. While Italy secretly signed a pact with France effectively negating their earlier agreement with Germany and their subsequent joining of the war on the side of the Triple Entente (Seymour, 1916, p. ...read more.

Conclusion The US is currently the only superpower, and hence the great hegemonic power of the day. I believe that this was inevitable due to the conditions that set the stage for both World Wars that I've detailed. The wars themselves, to include the Cold War, were where the battles were fought, but that is not where they began, they began in the Concerts of Europe and the colonial empires that prompted such destruction. The US because of its size, democratic government, free market, and abundant resources was in the process of becoming a world power. The US belief in manifest destiny and their nation being of a superior form of governance led to the US being in a position to gain the power, despite not initially wanting it. The US was opposed to entangling itself in both World Wars and it took aggression from Germany to enter WWI, and an outright attack by Japan to enter WWII. After the conflicts the US was the sole nation with the ability to stand up to Soviet aggression, and with the will to do so. The US has been the leader of the free world for 70 years and counting, and the sole superpower for 20 years now. While much is said of China's rise, they have a long way to go to gain superpower status, although they are posturing themselves economically and the US is now facing economic hurdles with our deficit. Since China is growing at a rapid rate, and desires more power, the question at hand is whether they will eventually rise to a superpower status to rival the US. As of today, "China is not now a superpower, nor is it likely to emerge as one soon. It is establishing itself as a great power, on par with Great Britain, Russia, Japan, and, perhaps, India. China is today a serious player in the regional politics of Asia, but also is just one of several. (Miller, 2004, p. ...read more.